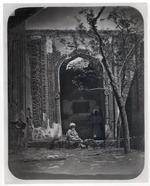 Thanks to Kurt Paulsen for pointing out this BBC story on mausoleums in Florida.  Yikes, they're expensive.  Here's a taste of the story:

Ed and Hilda Peck are both in their 80s and made their fortune in real estate back in the 1970s.

They drive up to us in a black Cadillac with private number plates and greet us warmly.

Ed tells me the idea of a mausoleum, where several generations of his family to come can be laid to rest, appealed for more than just sentimental reasons.

"I have a phobia about being put down in the ground and having dirt dumped on me and so this would eliminate that possibility," he tells me.

"We didn't want to be buried someplace that ended up with weeds and what not and be completely forgotten."

The couple give me a tour of their final resting place.

Their mausoleum, which cost $372,000 (£200,000), is made from white granite and features two prominent Greek pillars either side of the glass doors.

Inside, there is a family portrait and a chandelier. Standing inside what will be their grave, Hilda seems totally unfazed by the experience.

Further evidence, as if we need it, on the importance of cemeteries.  And it reminds me that I need to post a little bit on Sanford Levinson's gem of a volume on monuments, Written in Stone.

Endnote: The photo of the Mausoleum of Akmed Hadji in Samarkand is from the Library of Congress' collection.

Alfred Brophy
Comments are held for approval, so they will not appear immediately.

Listed below are links to weblogs that reference Grave Decisions in Florida: