What were the Elgin Marbles? 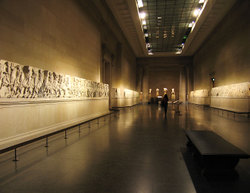 Such is the title of an interesting opinion piece by emeritus Professor John Boardman of Oxford University published in the weekend edition of the Wall Street Journal.  (It is subtiteld: A look at these sublime works and the British Lord who was their savior.)  Boardman's piece is available by subscription only, so let me give you the brief gist of it.  The "Elgin Marbles" are marble sculptures that once adorned the Parthenon.  In the early nineteenth century, Lord Elgin went to Athens and first made plaster casts of the marble sculptures; later he negotiated with authorities to remove some of the marble sculptures (others remained in place in the Parthenon until the late twentieth century, when they were removed to help protect them).  Professor Boardman writes of their importance and place in the British Museum:

Eventually, at great financial loss to him, they were acquired by the British Museum.  Their appearance created a revolution, influencing artistic thought during the 19th century and subsequently.  And in London they have remainded to instruct and delight millions annually.  If retuned to Athens they could only go into another museum and be seen by far fewer people, since Greece is visited less for art than for sunshine.  . . . [I]n Britain they transformed scholarly attitudes to Greek art world-wide, and have had more effect int he past 200 years than they did in over 2,000 in Athens....

There is much to think about here--in particular the moral implications of what should be done with the marbles now.  Boardman seems to think they should stay:

In a way the story of the Elgin Marbles reflects various modern dogmas. What is "cultural heritage"?  Does it belong to producers--or to the admirers who appreciate and are influenced by it? . . . Perhaps the "heritage of man" deserves the widest audience possible.

This discussion of "who owns native culture" is heard in many places these days.  And there are merits on all sides of the issue, I suspect.  In this case, the people who have so much (British Museum) are using some of what they have (a wide audience) as the basis for arguing for keeping what they have (the Elgin Marbles).  There are a couple of things implicit in Boardman's important piece:

Endnotes: For some other thoughtful commentary, see the Thomas Ulen, Robert Cooter website,  and Eric Gibson's piece from the WSJ from last December.  The public domain image of the Elgin Marbles in the British Museum is courtesy of our friends at wikipedia.  As with so many of my posts on cultural property, a special thanks to my colleague Carl Christensen.

Listed below are links to weblogs that reference What were the Elgin Marbles?:

» Latest on the Dispute Over 83 Hawaiian Cultural Objects (aka “Forbes Collection”) from PropertyProf Blog
The Honolulu Advertiser has the latest on the dispute over cultural objects valued at $10 million, taken from the Kawaihae Caves on the Island of Hawaii in 1905. The objects (some believe they are funerary artifacts) were in the Bishop [Read More]