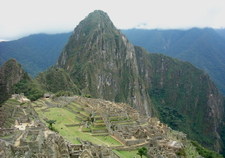 There have been a few articles recently on antiquities.  The Washington Post has been following the dispute over antiquities taken by Yale University Professor Hiram Bingham from Peru in the early part of the twentieth century.  The short version of this long story is that Peru wants the art back from Yale University’s Peabody Museum, which launched a major exhibit on them recently. The story goes back to 1911 when Hiram Bingham first visited Machu Picchu:

Bingham, an obscure 35-year-old adjunct professor until that July morning in 1911, was at the beginning of a great public career that would make Indiana Jones jealous: explorer, World War I aviator, author, governor of Connecticut, U.S. senator. . . . .

He may have cut a Hollywood-perfect image as an explorer, with exploits seemingly ripped from a script, but he was no tomb raider. The irony at the bottom of this ruckus is that 95 years ago, Bingham, Yale, National Geographic and Peru appeared to recognize the inherently unequal and morally fraught relationship between bankrolled explorers and bankrupt peoples.

They tried to do something about it: Laws were passed, words were inked, in hopes that 95 years later there wouldn't be a dispute over who owned what. That didn't work out so well.

The rest of the story is here.

(More about Hiram Bingham’s grandfather, a Hawaiian missionary, in a post here soon.)

And there is another story in yesterday’s New York Times on a gift by art collector Shelby White, a celebrated collector of antiquities, to New York University. Ms. White’s gift has caused some concern, because some fear that she has engaged in questionable collection practices:

By accepting the money, some argue, the university is tacitly approving Ms. White's practice of buying Greek and Roman antiquities, including some that experts believe were looted from archaeological sites. Some scholars point proudly to policies adopted by their own institutions, including the University of Pennsylvania, the University of Cincinnati and Bryn Mawr College, to discourage or even ban the acceptance of Levy-White money. . . .

Other professors at N.Y.U. are also concerned. "I think everybody wants to be able to look back in 20 years and say we were the vehicle for the best kind of scholarly research under the most ethical circumstances," said Laura M. Slatkin, a classics professor. "Our concerns are to ensure as much as we can that that's the case."

N.Y.U.'s president, John Sexton, said the university had no qualms about the donation. "Shelby White and her husband, Leon Levy, over time have done extraordinary things to benefit the advancement of knowledge, archaeology studies, the appreciation and love for antiquity and antiquities," he said in an interview.

As always, much to think about in terms of conflicts between the countries where the art is found and those who are wealthy enough to collect and preserve it.

Thanks to my colleague Carl Christensen for pointing me to the article on Hiram Bingham.  Visit the Yale University Art Gallery for some great photographs of South American art.  Peabody Museum’s page on the Machu Picchu exhibit here.  Image courtesy of wikipedia.

Listed below are links to weblogs that reference Antiquities Property and Law:

» Norms of Dress, the Market, and the Decline of Surfing, with special relation to the trade in Sandalwood from PropertyProf Blog
So here's something you probably never thought you'd see talked about: changes in surfing in the nineteenth century, which were inspired in part by the rise of the market economy in Hawaii and in part by norms of dress [Read More]

One can also find a recent NPR story on the same topic at: