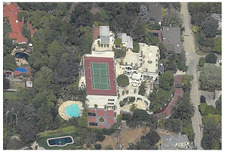 How could I possibly improve on E! On-Line's headline?  The upshot here is that Prince is being sued by his landlord for redecorating the house he is renting.  According to E!:

The ever-eccentric Grammy-winning Rock and Roll Hall of Famer has been sued by Utah Jazz forward Carlos Boozer for allegedly pimping out Boozer's West Hollywood home, which the diminutive rock star is renting for $70,000 a month.

Boozer originally filed a complaint against the Purple Rain singer in January, alleging him to be a less than ideal tenant, violating the terms of his eight-month lease via a series of self-promotional home improvements. . . .

Boozer claims Prince did an unauthorized extreme makeover to the 10-bedroom, 11-bath property, including "painting the exterior of the [house] with purple striping, 'Prince symbol,' and numbers 3121."

Thanks to the Smoking Gun for getting the goods (i.e., the complaint) on this one. But, um, he is, afterall, Prince.  Why not just buy the place (or one like it)?

Sounds like the makings of a great exam question to me.  This one's going to be talked about in property classes for years.

One final note: if mtvU's "Stand In" Show wants to bring Prince to my property class this semester, I know we can accommodate him.  Perhaps a few days in Honolulu is just what Prince and the mtvU crew need.

Listed below are links to weblogs that reference Purple Pain for Prince's Landlord: