More on Cemeteries: The Conflict Between Memory and Development 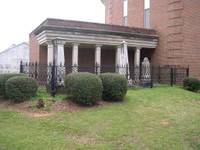 Lest you think my post on cemetery access was emphasizing an unimportant right, my colleague Justin Levinson points out that yesterday's Washington Post has an article, “More Family Cemeteries Dying Away in the South,” on the conflict between preserving family cemeteries and development in Tennessee.  As the article points out, there's frequently a conflict in the south:

In Tennessee, as in other Southern states, farm families in centuries past tended to bury their dead on their own land, allowing for quick interment and easy oversight of graves. . . .
Over the years, many families dispersed, undergrowth overtook the headstones and deeds changed hands. Some cemeteries -- particularly those where black families buried their kin -- used fieldstones as markers and are difficult to spot. . . .

Richard Binkley, who's building the subdivision, said he feels responsible for the dead on the property, but is torn about what to do. He bought and sold another property that had graves on it, and said he thinks his own family's cemetery was damaged by a careless developer.

"It's hard to buy a piece of property now that's on the outskirts of town that doesn't have a grave on it of some kind," he said. "It's come down to the point now where we're running out of space."

There’s a lot to talk about in the conflict between cemeteries and development, such as respect for the memory of the dead and their families and the needs of the living.  In the middle of the nineteenth century the Pennsylvania Supreme Court discussed the same problem. Should they permit respect for cemeteries or homes to impede eminent domain?  Of course not, said the court, with reference to the claims of the public:

The abodes of the living are not more inviolable than the abodes of the dead; yet thousands of human bones lie beneath the walks and alleys of Washington Square in Philadelphia, once its Potter's Field, now its most frequented pleasure-ground. If a cemetery cannot impede the march of improvement for purposes of recreation, how can the owner of a cottage expect that it will impede a work of necessity? The legislation of a country necessarily takes its tone from the temper and the necessities of the age. A house, a church, a grave-yard, or any thing else, may be conveniently privileged in an act to incorporate a turnpike or a canal company, because it may be avoided without lessening the usefulness of the work; but every deflexion from a right line in the bed of a railroad, is proportionately productive of danger to property and life. It is indispensable to safety and speed that the route of it be as direct as the surface of the country will permit; but they could not be attained in a settled country if every hovel or house were privileged; and thus a quasi national work, intended for posterity, might be botched through a respect for the sacredness of temporary erections. The course of a railroad might be insuperably obstructed by the obstinacy of a proprietor in the gorge of a mountain, or the pass be made, at least, difficult and dangerous. A mangled passenger, inquiring the reason of a deflexion, when the cause of it had disappeared, might be told of our infinite respect for property at the expense of safety; but the information would neither ease his pain nor set his leg.

The more things change, the more they stay the same.  You can read more about this here.

Photo Credit: My colleague Utz McKnight provided the picture of the cemetery on the University of Alabama's campus.  It was once the edge of campus.  Now it's next to the biology building.  The Washington Post's article has a photo by Josh Anderson of a family cemetery in Tennessee, which is now in the midst of a car lot.

Listed below are links to weblogs that reference More on Cemeteries: The Conflict Between Memory and Development: