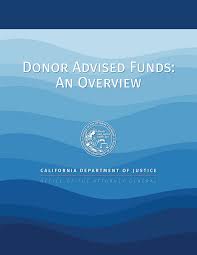 Donor advised funds are both continuing to grow and continuing to be subject to government and academic scrutiny, as illustrated by a new report, an Attorney General review, and a new academic article.

Second, the California Attorney General issued a report on its audit of donor advised fund sponsors registered in California. (Hat tip: Bloomberg (subscription required).) Here are the "notable takeaways" from the Executive Summary:

Third, David I. Walker (Boston University) has posted "Donor-Advised Funds in the Wake of the Tax Cuts and Jobs Act." Here is the abstract:

Donor-advised funds (DAFs) are conduits for charitable giving that support immediate tax deductions while creating a reservoir of assets for subsequent disposition to end-use charities. The number of new DAF accounts has skyrocketed in the wake of the 2017 Tax Cuts and Jobs Act (TCJA). This Article presents evidence suggesting that bunching charitable contributions to game the TCJA-enhanced standard deduction likely motivates much of the onslaught of new DAF accounts established since 2016 and argues that the typical buncher is likely to differ from other DAF account holders in ways that matter from a policy perspective. Thus, while DAF critics have generally focused on the unproductive accumulation of assets in DAF accounts and have advanced reforms aimed at speeding up DAF payouts, this Article argues that in the context of bunchers, unproductive accumulation of assets in DAF accounts is unlikely to be a major problem. The more significant problem with DAF-facilitated bunching is that the cost to the public fisc is unlikely to be justified by incremental charitable giving. Thus, while this Article concludes that regulation targeting DAF payouts is unobjectionable, it argues that a wholly different set of reforms targeting the deductibility of charitable giving generally would be needed to address the cost of DAF-facilitated bunching under current law and under thoughtfully reformed laws involving universal charitable deductions above a floor.