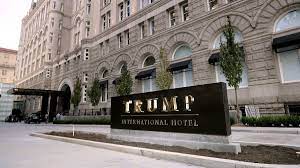 District of Columbia Attorney General Karl A. Racine announced earlier this month that "the Trump Organization and Donald Trump’s Presidential Inaugural Committee (PIC) will be required to pay $750,000 to the District to resolve allegations that the PIC, the Trump International Hotel, and the Trump Organization illegally misused nonprofit funds to enrich the Trump family. Those funds will then be redirected to two nonpartisan nonprofit organizations – Mikva Challenge DC and DC Action – that promote civic engagement of youth in the District."

The payment settles a lawsuit filed by the AG alleging that Inaugural Committee provided improper benefits to the Trump Organization and Trump family members in a variety of ways, including by overpaying for event space, throwing a private party, and repaying a Trump Organization debt. The Consent Motion for the settlement includes language common to such docuoments stating that the resolution is made "without it being in any way deemed or construed as an admission of wrongdoing, unlawful conduct, or liability on the part of Defendants."

At what point does bad behavior become criminal? I'm forever amazed at how the rich and powerful are able to write a check and keep it going. They just happened to get caught this time out of many I'm sure.