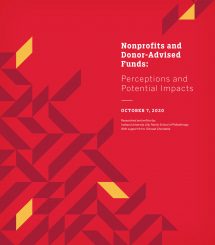 There has been a lot of news recently relating to the quickly growing universe of donor-advised funds. A recent analysis by the Chronicle of Philanthropy reports that eight of the nation's largest community foundations have seen giving from DAFs they oversee increase by 42% from March to April of this year. And a recent study by the Lilly Family School of Philanthropy (pictured)  finds that seven of ten nonprofits surveyed have received DAF grants, even as many nonprofit leaders expressed concerns relating to seeking and processing DAF gifts, especially relating to communicating with donors who give through a DAF.

Not surprisingly, the growth and spread of DAFs continues to attract proposals for increasing oversight of and rules for them. Last month the Chronicle of Philanthropy reported that billionaire John Arnold and law professor Ray Madoff have joined forces as part of their Initiative to Accelerate Charitable Giving to propose a set of federal tax law changes that would, among other goals, accelerate giving from DAFs. Push back was quick, including from the Philanthropy Roundtable.

At the same time, proposals related to DAFs are also being made at the state level. For example, members of the California legislature continue to pursue possible DAF-related bills, as detailed by Gene Takagi earlier this year. And a recent attempt in California to pass a bill (AB 2936) that would have established a state-law category of DAF sponsoring organizations failed in August, according to CalNonprofits. In Minnesota, a new report by the Minnesota Council of Nonprofits recommends that state law there be changed to "require charitable trusts transferring funds to a donor advised fund (DAF) to include in their annual trust filing with the office of the attorney general an itemized list of all grants and contributions made or approved for future payment during the year from that DAF."

Regardless of whether any of these proposals advance, we do know that Treasury is working on regulations relating to DAFs. As tweeted by Gene Takagi, Cindy Lott said at the NAAG/NASCO conference to expect some sort of DAF regulations in the next few months.