The Costs and Benefits of Being a Tax-Exempt Church 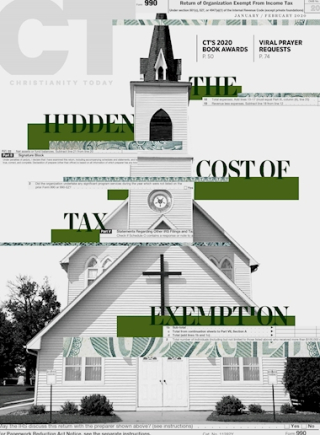 There has recently been an eclectic set of stories about churches and their federal tax status. In its January/February 2020 issue, Christianity Today's cover story was The Hidden Cost of Tax Exemption (subscription required) with the sub-title "Churches may someday lose their tax-exempt status. Would that be as bad as it sounds?" The story concludes:

It might not be such a bad thing to lose tax-exempt status. We should consider, at the very least, the cost of maintaining this kind of cultural privilege. The true church of God, after all, is not reliant on its special status in the tax code. We can walk by faith and not by government largess.

At the other end of the spectrum, the Washington Post had a recent story titled Major evangelical nonprofits are trying a new strategy with the IRS that allows them to hide their salaries. The story cited several religious organizations, including the Billy Graham Evangelistic Association and Focus on Family, that had successful sought church status from the IRS. The implication of the story was that they sought this status not for the tax benefits (which they already enjoyed) but for the ability to hide financial details, and particularly salary information, from government and public scrutiny because of the church exemption from filing the Form 990 series annual information returns. The religious charity rating organization MinistryWatch has also been critical of this trend.

Relatedly, the U.S. District Court for the District of Columbia has now released its reasons for dismissing the lawsuit brought by a section 501(c)(3) organization associated with the Freedom from Religion Foundation that challenged the church exemption from Form 990 filings. Perhaps not surprisingly, the court found standing to be a problem (citations omitted):

NonBelief Relief alleges in its proposed amended complaint that “[t]he Defendant’s unequal treatment of the Plaintiff is ongoing and will continue as long as churches continue to be exempted from the information filing requirements of § 6033.” The Court disagrees. The injury it alleges occurred when it had to file a Form 990, a requirement from which churches and religious organizations are exempt. But as discussed above, this alleged unequal treatment is not ongoing or imminent because NonBelief Relief faces no current or future prospect of having to fill out a Form 990. See And while it is true that the loss of its tax-exempt status is, in a sense, ongoing, NonBelief Relief has not based its standing argument on that loss, and for good reason. The relief it seeks—a declaration that the church exemption is unlawful and an injunction prohibiting the Commissioner from enforcing it—will not redress that loss. And as explained above, in any event, the Anti-Injunction Act and Declaratory Judgment Act deprive the Court of jurisdiction to reinstate NonBelief Relief’s tax-exempt status.

The Freedom from Religion Foundation has promised to continue challenging the church exemption from Form 990 filing, presumably by having NonBelief Relief pay some taxes, file a claim for refund, and then going to court when the IRS refuses to grant that claim (an option described by the court in its decision).

Finally, there is some interesting pressure on classification as a church from a different. non-tax direction. The N.Y. Times had a story late last year titled Inside the War for California's Cannabis Churches (hat tip: TaxProf Blog). The story highlights the emerging conflict between such churches and California authorities seeking to enforce the various rules regulating marijuana dispensaries in that state. The key issue is whether enforcement of those rules discriminates on the basis of religion, assuming that the members of these churches can demonstrate that they beliefs relating to use of marijuana are sincerely held.

I am the Chairman and Curator of Adath Israel Judaica Musium, and Religious Not-for-Profit educational Musium with NO Salaries or Expenses. Wgat would it cost for Ad Blocker annually?