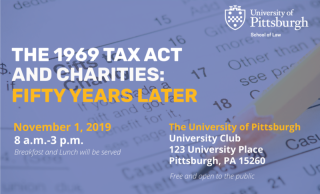 Where are we on the regulation of charity fifty years after Congress passed the Tax Reform Act of 1969? My colleague Tony Infanti and I along with our Pitt Law Students of the Pitt Tax Review hosted six scholars and two practitioners as commenters on Friday November 1 to consider that question. The symposium was entitled The 1969 Tax Reform Act and Charities: Fifty Years Later

Natural questions arise: (1) What was that act’s goal with respect to Charity? With respect to tax? (2) Did it accomplish these goals? (3) Are those goals still relevant today? (4) What goals might suggest themselves today? (5) Do we have the ability to make those changes that are needed? In our conversations we did not answer all of those questions, but we sure tried.

Pittsburgh as a city strikes me as a fit and proper place to ask these questions. Why do I say this? Pittsburgh, city of the rust belt, but also city of Carnegie, Frick, Mellon, Heinz, city of steel, coal, banking, and ketchup and now city of higher ed, tech, and cutting edge health care. It provides the natural and social landscape for investigating private wealth and its philanthropic use. At the beginning of the 20th Century Pittsburgh generated an enormous amount of the GDP of the US particularly through its manufacture of steel. That industrial choice brought great wealth to a few, and supported the careers of many, but also caused great damage to the environment for the long term. Pittsburgh as a city crashed in the 1980s (I have heard different dates, but place it there as that is when many of the steel mills seem to have closed down), and it has struggled to come back from the loss of the steel industry ever since.

However, today the city has transformed itself with Carnegie Mellon and Pitt driving a high tech economy, UPMC engaging in cutting edge health care connected with the University of Pittsburgh, and a robust provision of higher education. It almost surely survived to another day as a result of major philanthropic capital from the robber barron days from the likes of the Mellon, Heinz, Pittsburgh, and Hillman foundations. These private foundations led an effort to clean up the city and transform it into the more vibrant place that it is today.

Congress in the 1969 Tax Reform Act responded to a concern about the type of wealth harnessed in foundations like those in Pittsburgh. In fact, as discussed by Jim Fishman in his presentation about the history of the 1969 Tax Act the Mellon Foundation played a big role. Congress at the time was deeply concerned that wealthy individuals were abusing money put into charitable solution and decided it was important to stop those abuses. These papers consider both the origins of these rules and whether these rules still have relevance today.

The first panel considered the topic of Investing for Charity. Ray Madoff presented  The Five Percent Fig Leaf critiquing the five-percent payout rule that the 1969 Tax Act imposed on private foundations. Professor Madoff's paper was paired with Dana Brakman Reiser's contribution Foundation Regulation in Our Age of Impact. Professor Brakman considered the placement of program related investments and mission related investments within the current regulatory context and found the rules wanting in many ways.

The second panel was entitled Origins of Private Foundation Rules and their Meaning for Today. Jim Fishman provided great historical insight leading up to the Act in  Does the Origin of the 1969 Private Foundation Rules Suggest a Match for Current Regulatory Needs?  Interestingly, Professor Fishman thinks the Act really helped in creating the positive attitude many feel towards private foundations today. He thinks there is a real problem though with smaller private foundations where compliance is likely low. Khrista McCarden focused on a category we had not yet considered that of private operating foundations, which are treated a little better than typical private foundations in her piece entitled Private Operating Foundation Reform & J. Paul Getty. She is concerned about private art museums particularly because of their lack of broad community access.

Finally panel 3 considered Regulating Charitable Actors. Ellen P. Aprill presented  The Private Foundation Excise Tax on Self Dealing:  Contours, Comparison and Character. It usefully compares the general ethic of the different self-dealing rules that exist within the charitable context particularly that of section 4941 and 4958. However, more interestingly she considers both whether NFIB v. Sebelius might suggest that the 4941 excise tax is a penalty rather than a tax, and whether the tax might be able to serve as a Pigouvian tax. Finally, Elaine Wilson presented her paper Is Consistency Hobgoblin of Little Minds? Co-Investment under Section 4941. The paper focuses on certain PLRs that allow private foundation donors to "co-invest" with their related private foundation, seemingly in violation of the section 4941 self-dealing rule. It then shows why it is valuable from a securities regulation perspective for the private foundations to be provided this leeway from the IRS, and asks why the IRS would have twisted the seemingly clear meanings of the self-dealing exise tax.

I hope to blog about each panel in more depth the rest of this week.