"The NRA And Russia: How a Tax Exempt Organization Became a Foreign Asset" 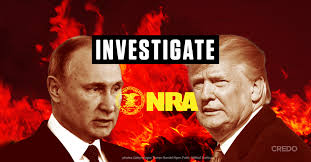 A 76 page Senate Finance Committee Report concludes that the NRA engaged in activities for private inurement, excess benefit and improper political influence peddling.  The report paints a dark picture of a powerful exempt organization coming under the influence of a foreign power and calls for legislative reforms.  Here is the conclusion from the Senate Finance Committee Minority Report entitled, "The NRA and Russsia:  How a Tax Exempt Organization Became a Foreign Asset;"

The minority staff investigation confirms that the NRA, its officers, board members, and donors engaged in a years-long effort to facilitate the U.S.-based activities of Maria Butina and Alexander Torshin. The U.S. Justice Department determined the activity of those Russian nationals—one now convicted of a felony charge of conspiracy to act as an unregistered foreign agent and the other designated by the U.S. Treasury Department for the Russian Federation’s global malign activity, including attempting to subvert Western democracies and malicious cyber activities—amounted to an illegal conspiracy to gain access to American organizations through the NRA. The scope of the NRA’s support for these Russian activities raises concerns about whether the activity in which the NRA, its officers and board members engaged  were in furtherance of the organization’s exempt purpose. The minority staff investigation confirms that some members of the NRA delegation participated in the Moscow trip primarily or solely for the purpose of advancing personal business interests, rather than advancing the NRA’s tax-exempt purpose. The findings of this report suggest that the use of the organization to advance personal business interests may have exposed the NRA to further  involvement in the Russian influence operation. In addition, use of NRA’s tax-exempt funds and resources in this manner raise concerns about the use of tax-exempt resources for a non-exempt purpose, private inurement prohibited under IRC section 501(c)(4), and prohibited excess benefit transactions under section 4958.  The IRS has long held that illegal activity conducted by a section 501(c)(4) tax-exempt entity or by an official in his official capacity can jeopardize its tax exemption. These particular findings should be considered in the context of any other potentially improper conduct that benefited its officers or board members the NRA may have been engaged in.  The minority staff investigation also confirms some members of the NRA delegation met with sanctioned  individuals. Further, members of the NRA delegation provided interviews, permitted the use of trademarked NRA logos, and appeared in promotional material for at least one sanctioned Russian arms manufacturer in their official capacity as representatives of the NRA. These interactions raise significant concerns under U.S. sanctions law. As described in this report, U.S. sanctions law does not prohibit meeting with SDNs, but does bar U.S. persons dealing in present, future, or contingent property interests of SDNs, including making or receiving contributions of funds, goods, or services to designated entities.  Participants’ willingness to meet with sanctioned individuals and entities, despite recognition of their  SDN status and the potential political sensitivity of such meetings, enabled Butina and Torshin to further entrench themselves in the NRA. This report illustrates potential weaknesses related to potential misuse of tax-exempt resources by section 501(c)(4) organizations and how such misuse can expose an organization to improper influence. The Committee and Congress should explore whether the current rules surrounding private benefit and inurement under section 501(c)(4) should be strengthened. In addition, the Committee and Congress should explore whether and to what extent the public policy doctrine and similar rules should apply to section 501(c)(4) organizations. Further, this report illustrates potential weaknesses to foreign intelligence threats by American tax-exempt organizations. Congress should explore options to reform tax-exempt laws to protect against foreign threats. Options for reform could include increased disclosure and information reporting, clarifying the definition of political activity for purposes of section 501, strengthening campaign finance rules surrounding so-called “dark money” organizations such as politically-active section 501(c)(4) organizations, and potentially establishing rules similar to those under section 501(p) to provide for the  suspension of tax exempt status of any organization that has organized meetings with sanctioned individuals or engaged in similar acts. A compulsory audit of the organization’s activity would be required to fully determine the severity of the actions identified in this report. Committee minority staff is aware that the New York State and District of Columbia Attorneys General offices have initiated audits of the NRA’s compliance with applicable tax laws. In addition, because determinations related to enforcement actions and revocation of tax-exempt status may depend on the persistence and quantity of impermissible acts, a broader review of NRA’s activities in recent years is necessary to determine whether NRA has engaged in a persistent pattern of impermissible conduct. The minority staff is aware of additional allegations of private inurement and
misuse of tax-exempt resources at the NRA beyond the 2015 Russia trip. Ranking Member Wyden has initiated an inquiry into these allegations and the minority staff will continue to review the findings from that investigation.

The U.S. and Russia relationship was vastly different in 2015 than it is today. In hindsight, the misplaced optimism that the Obama administration had toward Russia was obviously ill conceived given what we know today. The Minority report seeks to apply today’s standard, and what we know now about Russia, to the actions of various board members of the NRA. In that vein, the report is littered with salacious, unsubstantiated accusations, and reads as if there were an elaborate conspiracy theory by members of the NRA to aid in the attempted Russian infiltration of conservative organizations and the Republican Party. Unfortunately, just as the Obama administration cannot go back to correct its approach with Russia, the Minority cannot apply today’s standards with the conduct of NRA board members in 2015. But that’s what it does. The Minority report finds no facts that give rise to the possibility that personnel associated with the NRA engaged in any activities that call into question its tax-exempt status. The Minority report takes hold of the common practice of business travelers, giving multiple purposes to their business trips, so that ordinary behavior is painted with some supposedly nefarious purpose. To the extent NRA funds were used improperly in any facts discussed in the Minority report, it appears to have been minor, hardly a rounding error for an organization with hundreds of millions of dollars in revenue each year and nothing that cannot be corrected with minor intermediate sanctions. The Minority report discusses sanctioned individuals and companies in Russia with the hopes of connecting them to NRA personnel so as to “raise concerns,” but even the Minority must admit that just meeting with individuals on an OFAC list does not, unto itself, violate U.S. law. It is fair to analyze the wisdom of traveling to Russia in December 2015 to meet with high-ranking Russian officials, but it is nowhere close to reasonable to question the tax-exempt status of the NRA because of it. In the end, the Minority report contains much conclusory innuendo about an organization, the NRA, and repeatedly attempts to paint a picture that does not exist. The Minority report uses terms like “raises concerns” in an attempt to embarrass the NRA while absolving the Minority from having to assert any serious factual or legal analysis. The Minority report exaggerates several details while omitting or downplaying mitigating facts. The Minority report states, on several occasions, that it was unable to establish many assertions that it purports to make. In the Minority report, statements like these are often inserted at the end of a section, left without any analysis or elaboration. Glossing over such facts just because they are damning to a narrative  does not mean they do not exist. Despite this, the Minority report seeks to use this report as justification for a compulsory audit of the NRA in order to conduct yet another fishing expedition for wrongdoing. Therefore, the Majority finds that the facts do not support the Minority’s narrative or conclusions.