Obamacare Reduced the Need for Charity Care (and the justification for tax exempt healthcare?) 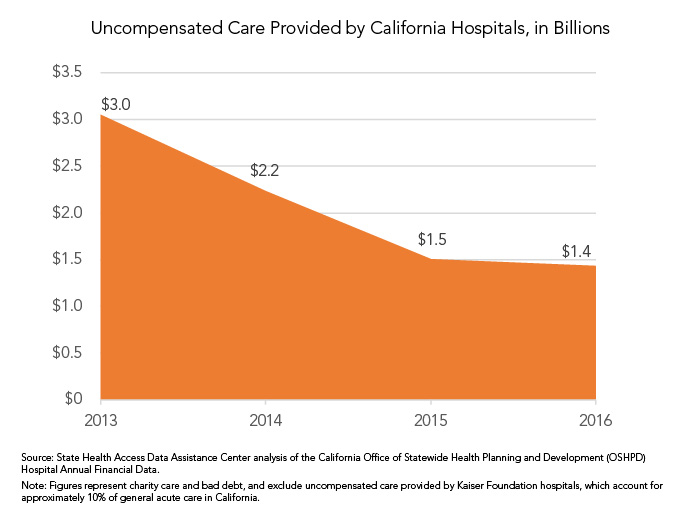 Two recent articles in California Healthcare literature, this one and this one, conclude that the amount spent on charity care by hospitals of all sorts (government, for profit, and non-profit) declined after the passage of the Affordable Care Act -- Obamacare.  The magazine, California Healthline, states:

The biggest decline in charity care spending occurred from 2013 to 2015, when it dropped from just over 2% to just under 1%. The spending has continued to decline, though less dramatically, since then.  The decline was true of for-profit hospitals, so-called nonprofit hospitals and those designated as city, county, district or state hospitals.  Health experts attribute the drop in charity care spending largely to the implementation of the federal Affordable Care Act, popularly known as Obamacare. The law expanded insurance coverage to millions of Californians, starting in 2014, and hospitals are now treating far fewer uninsured patients who cannot pay for the care they receive.  With fewer uninsured patients, fewer patients seek financial assistance through the charity care programs, according to the California Hospital Association. 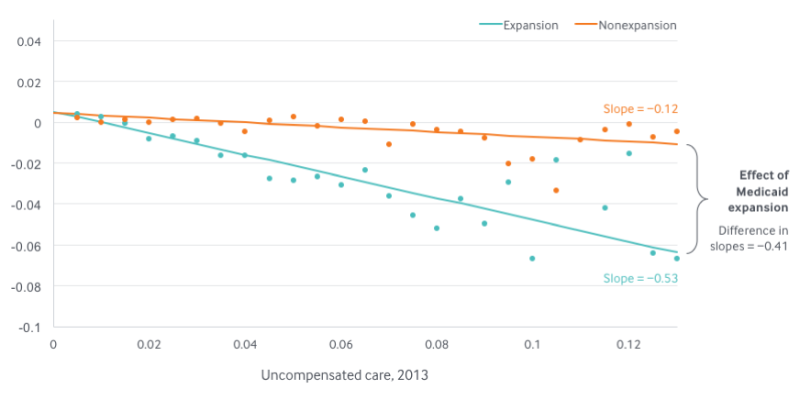 A slightly older (2017) study by the Kellogg School of Management found that the trend was true across the country and that nonprofit and government hospitals benefited the most from the decrease in the number of uninsured patients.  Kinda makes you wonder whether tax exemption for hospitals is still justifiable as the nation moves closer to universal health care (even if that progress has been stalled under the current administration).  Sooner or later, it seems to me, there has to be a reckoning between tax exempt hospitals and the inevitable trend towards health care as a right rather than a privilege.

I have both questions and observations on this, as my firm has several hospitals as clients and I have followed healthcare issues for Nonprofit Quarterly.

It's interesting that the charity care story relined on state-collected data rather than IRS Form 990 Schedule H information, despite the fact that CA state data doesn't include Kaiser Permanente hospitals. I'm not familiar with the CA state reports. Maybe they're better than the information provided to the IRS.

Most of the insurance expansion under the ACA has been additional coverage under Medicaid. The American Hospital Association (AHA) was initially supportive of ACA because it believed it would increase both patients and per-patient revenue. Unfortunately, Medicaid often copes with increased demand for services by restricting payments to providers, resulting in providers often not receiving reimbursements sufficient to cover costs. Medicaid reimbursement constriction and more Medicaid-covered lives are factors causing AHA and its members to reassess their support.

Simultaneously, increasing deductibles and copays for privately insured patients should be placing pressure on hospitals to provide more charity care to fill the medical indigence gap. Of course, most such revenue gaps are identified as bad debt and, even if eventually written off, aren't counted toward charity care because the patients/families aren't indigent in an absolute sense.

Hospitals make this situation even murkier because they desire to maximize their image by combining charity care with bad debt expense PLUS community health activities that, while usually beneficial, often look like marketing activities for the hospital. Rolling all three categories into a single "community benefit" number makes the number larger but glosses over all three component categories.

As to whether tax exempt hospitals should continue to be tax exempt, the legal test is still based on ownership, not net revenue margin. Even so, healthy hospitals have a 4% net revenue margin; many hospitals have margins under 1%. If the U.S. does indeed move toward of a government-paid healthcare system, we already have abundant examples of government partnering with the nonprofit sector in service delivery, both inside and beyond healthcare.

"many hospitals have margins under 1%"

Not in my neck of the woods. They run around 10%. And yes they are all profit making enterprises that ought to be taxed.

A hospital should only be deemed to be a charity if it does not require payment for its services. They can explain their costs and ask for donations afterward. But no bills and no sending anything to collection. I bet most of them would shut up and pay their taxes.

You said: "A hospital should only be deemed to be a charity if it does not require payment for its services."

Should the same restriction be placed on nonprofit educational institutions - only those who do not charge tuition and fees should be qualified for 501(c)(3) exemption as public charities? Would other public charities also be examined under the same test?