ProPublica: "The Nonprofit Hospital That Makes Millions, Owns a Collection Agency and Relentlessly Sues the Poor" 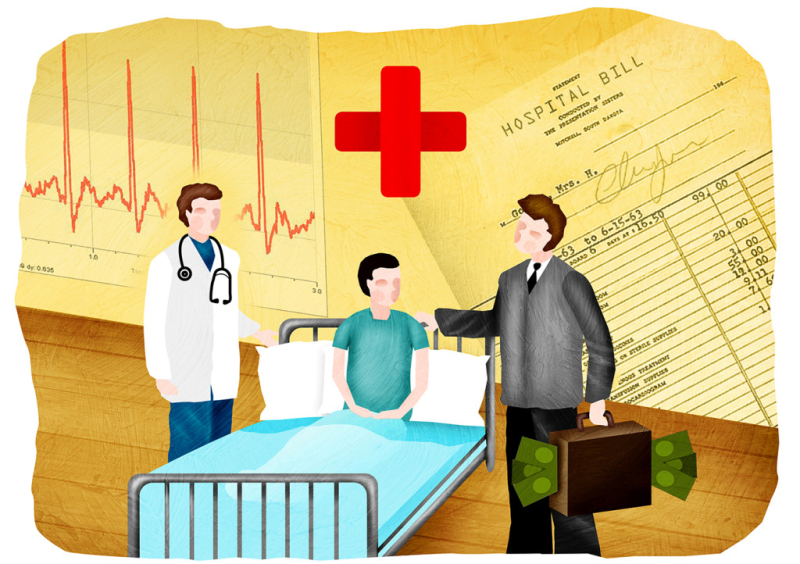 From the "what else is new department," ProPublica, the nonprofit newsroom, has a new article describing Methodist Le Bonheur Healthcare's "dogged" pursuit of poor patients who are unable to pay their medical bills.  According to subsequent media reports, the Hospital has now suspended its debt collection practices in the wake of the report.  Here is an excerpt from ProPublica:

In July 2007, Carrie Barrett went to the emergency room at Methodist University Hospital, complaining of shortness of breath and tightness in her chest. Her leg was swollen, she’d later recall, and her toes were turning black.  Given her family history, high blood pressure and newly diagnosed congestive heart failure, doctors performed a heart catheterization, threading a long tube through her groin and into her heart.  Her share of the two-night stay: $12,019.

Barrett, who has never made more than $12 an hour, doesn’t remember getting any notices to pay from the hospital. But in 2010, Methodist Le Bonheur Healthcare sued her for the unpaid medical bills, plus attorney’s fees and court costs.  Since then, the nonprofit hospital system affiliated with the United Methodist Church has doggedly pursued her, adding interest to the debt seven times and garnishing money from her paycheck on 15 occasions.  Barrett, 63, now owes about $33,000, more than twice what she earned last year, according to her tax return.  “The only thing that kept me levelheaded was praying and asking God to help me,” she said.  She’s among thousands of patients the massive hospital has sued for unpaid medical bills. From 2014 through 2018, Methodist filed more than 8,300 lawsuits, according to an MLK50-ProPublica analysis of Shelby County General Sessions Court records. Older cases like Barrett’s, which dates back nearly a decade, remain on the court’s docket.

The article references and links to a June 25, 2019 study (subscription required) published in the Journal of the American Medical Association.  Here is a summary of that study:

An estimated 20% of US consumers had medical debt in collections in 2014.1 Medical debt has been increasing with direct patient billing, rising insurance deductibles, and more out-of-network care being delivered, even at in-network facilities. Bills sent directly to patients may use the undiscounted price of a hospital’s services and can result in financial hardship2 and avoidance of future medical care.3 Hospitals need to be paid for care delivered, but some bills are unpaid. Hospitals may negotiate, reduce, or write off payments. Some have begun adopting a range of aggressive strategies for collecting unpaid bills, including suing patients and garnishing their wages or bank savings.3 We examined garnishment legal actions among Virginia hospitals.

ProPublica continues with a citation to our colleague John Colombo, who is probably fly fishing somewhere as we speak:

Methodist’s aggressive collection practices stand out in a city where nearly 1 in 4 residents live below the poverty line.  Its handling of poor patients begins with a financial assistance policy that, unlike many of its peers around the country, all but ignores patients with any form of health insurance, no matter their out-of-pocket costs. If they are unable to afford their bills, patients then face what experts say is rare: A licensed collection agency owned by the hospital.

Lawsuits follow. Finally, after the hospital wins a judgment, it repeatedly tries to garnish patients’ wages, which it does in a far higher share of cases than other nonprofit hospitals in Memphis.  Its own employees are no exception. Since 2014, Methodist has sued dozens of its workers for unpaid medical bills, including a hospital housekeeper sued in 2017 for more than $23,000. That year, she told the court, she made $16,000. She’s in a court-ordered payment plan, but in the case of more than 70 other employees, Methodist has garnished the wages it pays them to recoup its medical charges.

Nonprofit hospitals are generally exempt from local, state and federal taxes. In return, the federal government expects them to provide a significant community benefit, including charity care and financial assistance.  Methodist does provide some charity care — and pegs its community benefits as more than $226 million annually — but experts faulted it for also wielding the court as a hammer.  “If Warren Buffett walks in and needs a heart valve procedure and then stiffs the hospital, then yes, you should sue Warren Buffett,” said John Colombo, a University of Illinois College of Law professor emeritus who has testified before Congress about the tax-exempt status of nonprofit hospitals. “I can’t think of a situation in which thousands of your patients would fit that.”

The Wall Street Journal recently published an article on the same issue. They published responsive letters today that reinforced a point I have tried to make a couple of times:

Regarding “When Patients Can’t Pay, Many Hospitals Sue” (WSJ.com, June 26): I suspect nonprofit hospitals’ “millions of dollars annually in charity care” includes, besides puffery, much creative accounting. That charity care always starts with hyperinflated charges that no one—except the uninsured—actually pays, and probably ends as the sum of uncollectible debt and “across-the-board discount[s]” for the uninsured. Is a 30% discount really charity, when discounts to the insured and those with Medicare or Medicaid can be as high as 90%? ...

In 2016, the latest year for which the Centers for Medicare and Medicaid Services has published data, Mary Washington Hospital in Fredericksburg, Va., charged Medicare for outpatient procedures an average of 5.6 times the amount that Medicare paid. Those charges represent Mary Washington’s “chargemaster” retail prices. The article reports: “At Mary Washington, uninsured patients already receive an across-the-board discount of 30%.” The discount referenced is from chargemaster prices, which are completely disconnected from costs or expected reimbursements. So Mary Washington, based on actual 2016 charges minus the 30% discount, is billing the uninsured four times what Medicare paid for the same procedure, and it is suing for that amount. ...