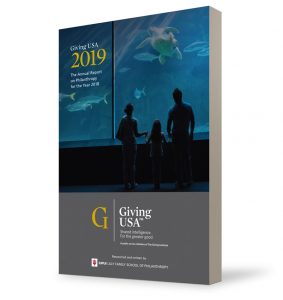 The annual Giving USA report provides what is generally recognized as the most comprehensive report on charitable giving in the United States. It is therefore not surprising that this year's edition is garnering headlines for its report that total giving in 2018 only increased by 0.7% over 2017, and declined by 1.7% when adjusted for inflation, despite the continuing strong economy. Giving by individuals also declined, both in current dollar (-1.1%) and inflation-adjusted (-3.4%) terms, but was partially offset by increased foundation and corporation giving. A variety of reasons may have caused the declines, including the recent tax law changes, as noted in the press release that accompanied the report:

A number of competing factors in the economic and public policy environments may have affected donors’ decisions in 2018, shifting some previous giving patterns. Many economic variables that shape giving, such as personal income, had relatively strong growth, while the stock market decline in late 2018 may have had a dampening effect. The policy environment also likely influenced some donors’ behavior. One important shift in the 2018 giving landscape is the drop in the number of individuals and households who itemize various types of deductions on their tax returns. This shift came in response to the federal tax policy change that doubled the standard deduction. More than 45 million households itemized deductions in 2016. Numerous studies suggest that number may have dropped to approximately 16 to 20 million households in 2018, reducing an incentive for charitable giving.

“The complexity of the charitable giving climate in 2018 contributed to uneven growth among different segments of the philanthropic sector. Growth in total giving was virtually flat. Contributions from individuals and their bequests were not as strong as in 2017, while giving by foundations and corporations experienced healthy growth,” said Amir Pasic, Ph.D., the Eugene Tempel Dean of the Lilly Family School of Philanthropy. “Charitable giving is multi- dimensional, however, and it is challenging to disentangle the degree to which each factor may have had an impact. With many donors experiencing new circumstances for their giving, it may be some time before the philanthropic sector can more fully understand how donor behavior changed in response to these forces and timing.”

It remains to be seen if these trends continue in future years, particularly as individuals and households continue to adjust to the 2017 federal tax law changes.

In the News, Studies and Reports | Permalink

The tax data no longer includes small contributions by people who no longer itemize because the SaLT deduction was capped at 10K$ and the standard deduction was increased. Basically what we have here is output from econometric models and tax data that is not comparable to previous years. In other words GIGO.

I agree that Giving USA's methodology sucks. But is there a decent alternative? To my non-academic eyes both the AFP and Blackbaud methodologies suffer from different but also very bad methodologies.