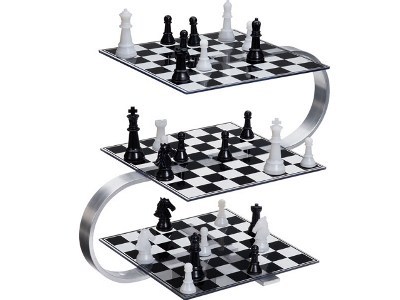 Happy Friday!  Our bloggers have been busy with final exams so you may have noticed some dead "air space" on our network this week.  But the biannual rite of weeping and gnashing of teeth is coming to a close so hopefully we can get back to regular blogging.   In that regard, I invite you to take a look at a wide ranging article on the makings and unintended consequences of "nonprofit tax policy," authored by Tim Delaney of the National Council on Nonprofits.  Here is a brief excerpt from Nonprofit Tax Policy -- A Game of Three Dimensional Chess which was recently published in the Nonprofit Quarterly:

It would be comforting if tax and other public policies were made rationally, based on logic and irrefutable facts. For instance, utilitarians—both classical (Jeremy Bentham, John Stuart Mills) and modern—would have policy makers conduct a cost-benefit analysis to identify what laws (including tax laws) would promote the greatest benefits and do the least harm. Applying this view, calculations could be made on how increasing this element and altering that one on the Rubik’s Cube of tax policy should deliver a particular result.

Occasionally, it can work that way. But at the end of the day, tax policy is an exercise of power. Some interest group (a business, industry, unit of government, economic or political class, and the like) simply wants more money. Does it have enough power to alter tax policy? If its desire for more money is strong enough, a political tug-of-war between the status quo and those wanting more money will ensue—regardless of whether “more money” in a given case is for the common good or for special interests. It’s about who has sufficient power to win the tug-of-war.

It started that way in 1601, when England’s ruling class—seeing “their” tax revenues and attendant power being taken by religious institutions—exerted power to secure the Charitable Uses Act. It continues through modern times. The federal Tax Cuts and Jobs Act that passed in December 2017 provides three graphic examples of how the exercise of power fueled by desire for more money can override everything else when tax policy is involved.

The lesson of each of these examples is that the power game frequently takes precedence over logic, the ethics of cost-benefit analyses, regular processes, and/or fundamental fairness on matters concerning tax policy issues. This places a heavy burden on the nonprofit sector to be present in tax debates at every level of government and monitor tax proposals in every branch of government. This sounds quite daunting, but coordinated and cross-informed action has proved successful, as can be seen below.

I may have to read the article another time before I can make a reasoned comment.  But it seems provocative.