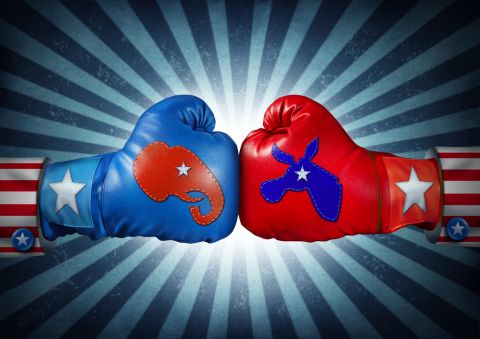 We have previously blogged about the sudden and increasing use of Form 13909 (Tax Exempt Organization Complaint (Referral)) to bring complaints from left or right leaning organizations against exempt organizations generally considered right or left leaning, respectively.  We've blogged about complaints against the Southern Poverty Law Center and the NRA.  The latest complaint, filed by the right leaning National Legal and Policy Center against the left leaning Center for Global Policy Solutions (CGPS), asserts that Maya Rockeymoore Cummings, wife of Representative Elijah Cummings (D-MD) and a principal fiduciary of CGPS, is the beneficiary of illegal private benefit and prohibited campaign intervention by CGPS.  Here is a summary of the complaint from the Washington Examiner:

Rockeymoore runs two entities, a nonprofit group called the Center for Global Policy Solutions and a for-profit consulting firm called Global Policy Solutions, LLC, whose operations appear to have overlapped, according to the IRS complaint filed by watchdog group the National Legal and Policy Center on Monday. The complaint states that the arrangement may have been used to derive "illegal private benefit." Global Policy Solutions received more than $6.2 million in grants between 2013 and 2016, according to tax records. Several of the nonprofit group’s financial backers — which included Google, J.P Morgan, and Prudential — have business interests before the House Committee on Oversight and Government Reform. Cummings has served as Democratic chairman of the committee since January and previously served as ranking member.  The largest contributor to the nonprofit organization was the Robert Wood Johnson Foundation, a company that is regulated by Cummings’ committee. The foundation, which gave a total of $5.5 million to Rockeymoore’s consulting firm and $5.2 million to her nonprofit group, ceased supporting her groups in 2017 . . . The complaint asked the IRS to investigate the “shared leadership,” “integrated operations,” and “shared address and physical facilities” of her two companies. Rockeymoore’s nonprofit and the LLC have mutual clients, donors and projects, and were located at the same address and share a phone number.  According to its website, the Center for Global Policy Solutions is a nonprofit group that seeks to “create healthier communities, strengthen Social Security, and close racial wealth disparities." The for-profit consulting firm, Global Policy Solutions LLC, describes itself as “a social change strategy firm dedicated to making policy work for people and their environments.” The complaint states that they “appear to operate almost as a single entity, allowing for an illegal private benefit for Maya Rockeymoore Cummings and her husband."

Today, the Washington Post published a story in which Maya Rockeymoore Cummings and Representative Elijah Cummings pushed back against the complaint:

“It appears a conservative front group and a news outlet . . . are pushing a hit piece filled with faulty research, lies and innuendo in an attempt to tarnish my personal reputation, professional work and public service as well as that of my spouse,” Rockeymoore Cummings said in a statement, calling the effort a “distasteful attempt to intimidate my family into silence at such a pivotal moment in our nation’s history.” Cummings echoed his wife’s remarks in a statement of his own, dismissing the claims as “a fabricated distraction from the important work being done on behalf of Americans, such as lowering the skyrocketing prices of prescription drugs.”

The indications of improper private benefit and campaign intervention, according to the complaint include:

The complaint seems obviously politically motivated -- Rep. Cummings is leading the House efforts to get at President Trump's tax returns and is a leading proponent, according to some, of impeaching the President.  His wife is Chairperson of the Maryland Democratic Party and a former candidate for Governor of Maryland.  Even so, the complaint makes a prima facie case (that is, it states facts which, if true support a finding of private benefit), it seems to me.  I wonder how the Service is dealing with all of these complaints.  After what the folks at TaxProf Blog called the "IRS Scandal" every single day for nearly 5 years, I gotta think the Service is probably not assigning anybody to seriously delve into any of the culture war complaints.

Thank you so much for this information and ideas. This website provides lots of new ideas and information. Keep it up.

I found your article truly amazing and interesting, it is quite useful
Thanks for sharing your great post.

Thanks for sharing your knowledge with us it is beneficial and hopes you will continue to share your innovative ideas with us.