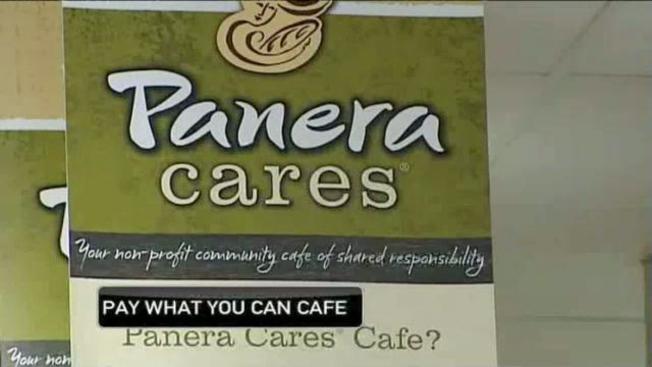 Many thanks to Russ Willis and his Jack Straw Fortnightly* Newsletter for passing along the Petition for Declaratory Judgment filed in Panera Bread Foundation v. Commissioner (Docket No. 5198-19).  I really had to shake my head after reading the letter revoking Panera Bread Foundation's tax exempt status.  This is part 1 of my rant, dealing with the Commerciality doctrine.  Part 2, tomorrow will take up the private benefit argument.

Panera Bread -- everybody knows Panera Bread -- set up a nonprofit to help fight "food insecurity" (also known as "hunger in America").  They opened fancy looking soup kitchens in apparently well kept business settings  in five different cities (Chicago, Boston, Portland, Dearborn, and Clayton Missouri).  They called the places "Panera Cares" and as the picture below indicates, Panera Cares look a lot like the Panera Bread restaurants.   The charitable catch, though, is that payment is entirely optional; not just "pay what you can" but "pay whatever you want."  People can come in and order the apparently similar quality food as is available from Panera Bread.  Payment is completely optional, just like in a soup kitchen.  I make a decent living but there is a soup kitchen near downtown Orlando [where my law school is] and if I want to eat lunch there free instead paying for lunch at my favorite fast food joint I can do so, no questions asked.  I can leave a donation if I want or I can eat and leave.  Anyway, at Panera Cares there were (the last Panera Care left closed two months ago for a variety of reasons discussed below) signs over the menu that list "suggested donations" for each item.  In 2012 60 percent of the patrons gave more than the suggested donation, 20 percent paid the suggested donation, and 20 percent paid less.  The revocation letter states that the 60 percent who paid more than the suggested donation -- the service considers the suggested donation as the actual value of the meal -- "are not [emphasis in the original] informed" of the deductible amount, nevermind that a written acknowledgment is required only for donations of $250 or more. 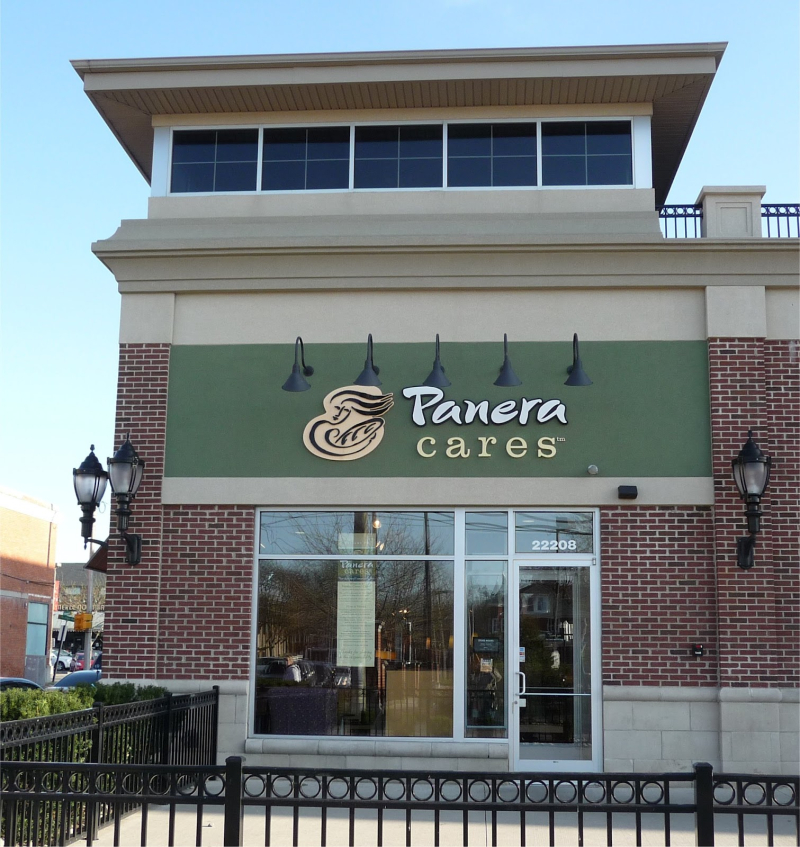 In a letter dated December 20, 2018, the Service revoked Panera Cares' exempt status (granted in 2012, though the 1023 did not describe Panera Cares; it merely described a program to fight hunger in America):

You are not operated for charitable or other exempt purposes, as required by section 501(c)(3).   Your primary activity was operating community cafes located in former for-profit restaurant locations, and where most individuals had the financial means to pay for the retail cost or greater of the items provided.  Providing food and drink to the members of the general public absent a showing of need is not a charitable purpose under section 501(c)(3).  In addition, operating a restaurant open to the general public during commercial business hours and accepting retail cost or greater in payments from individuals receiving the food items indicates a substantial non-exempt commercial purpose.  Also, this activity was funded primarily through support by a related for-profit entity and through the operation of cafes similar in appearance and operation to the related for-profit, rather than through donations or other support indicating community oversight from the general public, further showing that the operations of the cafes were for substantial non-exempt private rather than public purposes.

There is a lot to unpack but the reasons seem to boil down to the following:  (1) Panera Cares feeds anybody without regard to ability to pay, a fact which necessarily means that some people who have the ability to pay will not be turned away, (2) Panera Cares will accept voluntary payments -- i.e. donations -- from anybody willing though not required to pay for the food, (3) Panera Bread, a for profit, controls Panera Cares and is Panera Care's primary source of funds besides the voluntary payments  (4) Panera Cares facilities look an awful lot like Panera Bread facilities and indeed the menus are similar.  In its extended analysis (Form 886-A), (you can download the entire file including the unredacted letter ruling and the Form 886-A here: Download Panera petition) the Service also thought it important that the the Panera Cares' cafes were located in affluent locations, presumably out of the way of the poor people who would most benefit from the free food.  Funny thing, I don't ever remember seeing an exempt Museum of Art in "the hood" but maybe that's just me.  But what bothers me most about the analysis is that it seems to be a conclusion in search of precedent.  Here are the cases and rulings cited in support of the conclusion that Panera Cares violates the "commerciality doctrine."

All of these cases strike me as both inapposite and irrelevant, mostly because each of the cases involved organizations that required payment and have nothing whatsoever to do with feeding poor people.  Not only that, prices were set at or above cost.  More appropriate cases -- cases that support the petitioner, in fact -- include Federation Pharmacy Services v. Commissioner ("An organization which does not extend some of its benefits to individuals financially unable to make the required payments reflects a commercial activity rather than a charitable one.")  By the way, the Court in Federation noted that the organization in BSW  violated the commerciality doctrine because it charge a [required] fee.  The Service should also look at Presbyterian and Reformed Publishing Co. v. Commissioner which sold subscriptions for a [required] fee, which, in the aggregate, allowed the organization to accumulate large profits, and Living Faith Inc. v. Commissioner which operated vegetarian restaurants and health food stores in which goods and services were sold for [required] retail prices.  But here is the kicker for the commerciality doctrine:

When undertaking [the commerciality] inquiry, we look to various objective indicia. The particular manner in which an organization's activities are conducted, the commercial hue of those activities, competition with commercial firms, and the existence and amount of annual or accumulated profits, are all relevant evidence in determining whether an organization has a substantial nonexempt purpose. See B.S.W. Group, 70 T.C. at 357; United Missionary Aviation, Inc., 60 T.C.M. (CCH) at 1156-57. Living Faith argues that the Tax Court unduly relied on such factors, however, and inordinately emphasized the nature of its activities. Living Faith maintains that "great weight [should] be given to the assertions of religious purpose made in good faith on behalf of the organization." Appellant's Br. at 26. In this regard, it asserts that good health is an especially important component of the Seventh-day Adventist Church, and that its Country Life operations further this religious purpose . . . It is significant that Living Faith is in direct competition with other restaurants. "Competition with commercial firms is strong evidence of the predominance of non-exempt commercial purposes." B.S.W. Group, 70 T.C. at 358; see Incorporated Trustees of Gospel Worker Soc. v. United States, Dep't of Treas., 510 F. Supp. 374, 379 (D.D.C.), aff'd without op., 672 F.2d 894 (D.C. Cir. 1981), cert. denied, 456 U.S. 944, 102 S. Ct. 2010, 72 L. Ed. 2d 467 (1982). Living Faith has failed to demonstrate that its business, which operates in a shopping center, does not compete with other restaurants and food stores. Living Faith's prices, for example, are set "competitively with area businesses," using pricing formulas common in the retail food business. This lack of below-cost pricing militates against granting an exemption. See Federation Pharmacy, 625 F.2d at 807; Senior Citizens Stores, 602 F.2d at 714; B.S.W. Group, 70 T.C. at 359-60. Indeed, the profit-making price structure looms large in our analysis of its purposes. See Easter House v. United States, 12 Cl.Ct. 476, 486 (1987). [emphasis added]

Other indicia of commerciality include the manner of advertising, the way in which customers are pursued, and other indicators that an organization looks just like a for profit counterpart.  Consider this excerpt from an article describing a typical day at Panera Cares:

Customer complaints were another unexpected issue. Former Panera Cares employee Sharon Davis told Planet Money that a customer once complained about the homeless customers who frequented the location. “She comes up and goes, ‘Oh my god, these people stink. I can’t stand eating like this,’” she said, “And I said, ‘Well, I’m really sorry, but they are entitled to a meal.’”  Panera employees similarly found themselves dealing with issues they weren’t qualified to handle, like mental health issues and drug use in the cafe’s bathrooms, according to the Planet Money interview. Davis, the former Panera Cares employee, told Planet Money that she and her coworkers often served as de facto social workers as well and would refer customers to shelters and rehabilitation centers.

Try going to the Olive Garden smelling like you slept in a dumpster or arguing with someone nobody else sees and see if you get seated.  Yet Panera Cares catered to folks just like that and even defended the need to do so.  And heaven forbid a mentally ill person is allowed to sit down and eat like a normal person for a few minutes.  That's not charity simply because they might be seated next to a clean smelling sane person?  Does any of this sound like sound business practices that comprise a "commercial hue"?  Just which other eatery was Panera Cares competing with?

It seems the Service is just not pleased that Panera Cares stores were located in "affluent" downtown areas (an assertion that Panera Foundation disputes, by the way), rather than in the hood and that the stores were not unattractive to regular folk the way a traditional soup kitchen might be unattractive to people who can afford to buy their own food (because of the presence of those pesky smelly people who might also ask for "spare change").  Still, the biggest fact remains that the food was "free" and the people who paid were necessarily making a donation.  Whether the receipt of something in return denies or reduces their charitable contribution deduction is wholly besides the point.  It might be a good policy that tax exemption be reserved only for organizations that exclusively serve the poor, but that is just not the law.  Sheeesh!

The Service didn't cite any cases supporting its finding that Panera Cares violates the private benefit doctrine but that seems a much closer question.  See, e.g., KJ's Fund Raisers, Inc. v. Commissioner, Western Catholic Church v. Commissioner, and est of Hawaii v. Commissioner.  I'll talk about those cases and how they might give Panera Cares some problems tomorrow.

Thanks for the shout-out, Darryll. As I mentioned in my newsletter, I had some firsthand experience with the Panera Cares cafe in Portland, which is at odds with the examiner's assessment, and more in line with what you are quoting from Vox.

Looking forward to part two tomorrow. I do think it may have been a mistake to brand these cafes in a manner that was so similar to the for-profit entity.

Under the IRS's stated analysis, almost no nonprofit hospital would be exempt. They charge essentially the same prices as for-profit competitors (where competition exists); they treat mostly people who can pay via private or government insurance; many are located in affluent areas (e.g., any number of hospitals in wealthy city suburbs). The inconsistencies in the IRS's application of the commerciality limitation are maddening.