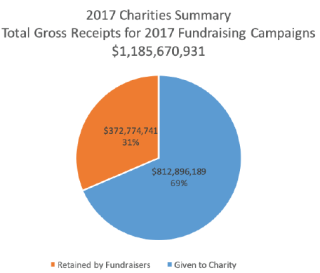 New York Attorney General Barbara D. Underwood has issued her office's annual Pennies for Charity report, detailing the activities of professional fundraisers in that state. From the report:

This year’s Pennies for Charity report includes data from the 964 fundraising campaigns conducted all or in part in 2017 by professional fundraisers in New York. The campaigns raised over $1 billion. Key findings include:

• Over $372 million (31%) of funds raised were paid to fundraisers to cover the costs of conducting the charitable campaigns. Charities received $812+ million overall.

The New York AG's office also provides a database with detailed information for campaigns, searchable by charity or fundraiser name.