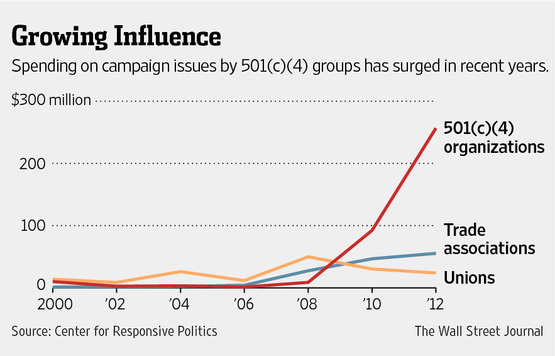 David Pozen has an interesting piece in The Atlantic regarding social justice organizations' increasing embrace of 501(c)(4) status over (c)(3) status.  Here is an excerpt:

Many groups gravitated to section 501(c)(3) because public charities enjoy unique tax benefits—most notably, they can receive deductible donations—and tend to be favored by wealthy foundation funders. But these perks come at a price. Public charities are required by law to keep their legislative lobbying to a minimum and to forgo politicking altogether. Taking a stand for or against a candidate for elective office is strictly prohibited. The 501(c)(3) form fit snugly into the postwar theory of legal liberalism, in which the federal courts were seen as the key agents of social reform and professionally managed nonprofits as their partners in that effort.

This model had been fraying long before the Trump presidency. Labor unions, under sustained attack from the right, suffered a steep decline in membership and clout over the latter half of the 20th century. Public charities continued to proliferate, but as progress on racial integration stalled out and levels of economic inequality and partisan polarization crept up and up, many on the left began to question whether a court-centric approach was capable of producing lasting social change.

The 2016 election pushed these concerns past the breaking point. Thousands upon thousands of well-established public charities, after all, didn’t translate into robust voter turnout. Nor did they halt the ascent of a demagogue. And with Brett Kavanaugh’s recent confirmation, whatever remained of the left’s faith in the Supreme Court as an engine of justice has crumbled. While lawsuits may be crucial for challenging certain flagrant abuses of power, many resistance groups feel compelled to participate directly in the rough-and-tumble of electoral politics.

And so they have turned to … section 501(c)(4) of the Internal Revenue Code. Many of the key groups founded to resist Trump, including Indivisible Project, Onward Together, Our Revolution, Sixteen Thirty Fund, Stand Up America, and Women’s March, are abandoning the 501(c)(3) public-charity route and incorporating as 501(c)(4) “social welfare” organizations instead. Social-welfare organizations are also exempt from federal income tax, but they have fewer fiscal privileges. Donations to them are not deductible. Yet unlike public charities, they may lobby as much as they wish, and they may engage in partisan political work—from asking candidates to sign pledges to registering like-minded voters to endorsing specific pieces of legislation—as long as that work is not their “primary” purpose or activity (a requirement so hard to define and enforce that, in the words of one leading nonprofit tax scholar [John Colombo], it “virtually invites wholesale noncompliance”). Since this past summer, social-welfare organizations have also been allowed to withhold the names of their donors from the Internal Revenue Service.

Federal tax law allows social-welfare organizations to be affiliated with public charities as well as with pacs. So while anti-Trump start-ups are setting up shop as 501(c)(4)s, long-standing civil-liberties and civil-rights groups are reallocating resources to (c)(4) arms. In fiscal year 2017, for example, total assets of the American Civil Liberties Union’s (c)(3) grew 17 percent. Total assets of its (c)(4), on the other hand, grew 89 percent. This past June, the Southern Poverty Law Center spun off a (c)(4), the SPLC Action Fund. The NAACP went further and transformed itself entirely last year from a 501(c)(3) into a 501(c)(4). This restructuring was necessary, the incoming president explained, for the NAACP to “have the collective voice and impact that a civil-rights organization in 2017 and forward should have.”