Point/Counterpoint: Section 501(c)(3) and the Taxation of Speech

Columbia Law School Professor Philip Hamburger is a prodigious and iconoclastic legal scholar. ... Hamburger’s latest subject, in Liberal Suppression ([University of Chicago Press] 2018), is an inquiry into the legitimacy of restrictions on the political speech of non-profit organizations.  Section 501(c)(3) exempts religious, educational, and charitable organizations from federal income tax but denies them this exemption if they engage in campaign speech for or against any candidate for public office or devote a substantial part of their activities to propaganda or other attempts to influence legislation. Section 170(c) makes contributions to qualifying non-profits tax-deductible to the donor. According to Hamburger, these exemptions and deductions amount to “many billions of dollars annually.” 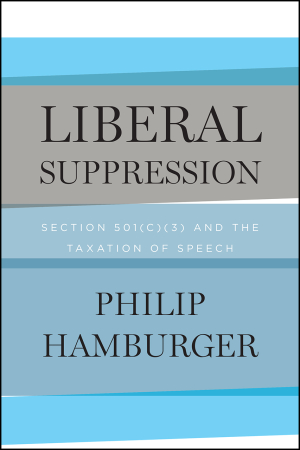 Most people’s knee-jerk reaction is that section 501(c)(3)’s restrictions are justified by the tax-exempt status such non-profit organizations applied for and received. Rejecting such preconceptions in his trademark fashion, Hamburger strongly disagrees. Although non-profits are free to express a wide range of opinions—even political opinions—outside of political contests, Hamburger views section 501(c)(3) as “an extraordinary abridgement of an essential freedom,” which ought to be considered unconstitutional. Inasmuch as the Supreme Court has unanimously upheld the lobbying restrictions in section 501(c)(3), Liberal Suppression is nothing if not ambitious, but is it persuasive? Realizing that his arguments may appear to be an “uphill struggle,” early on Hamburger asks readers to “hold their skepticism in abeyance.”

After reading the book, my skepticism remains stubbornly intact.

Hamburger reminds the reader that from colonial times until the amendment of section 501(c)(3) in 1934 (and further tightening in 1954, and again in 1987), which imposed the restrictions he finds objectionable, American clergy actively participated in politics from the pulpit. The timing of the 1934 and 1954 restrictions, he points out, coincides with a period of “liberal” anti-Catholic sentiment in America. The principal culprits in Hamburger’s tale are nativists such as Ku Klux Klan imperial wizard Hiram Evans and then-Senator Lyndon B. Johnson, who faced a Catholic opponent in the 1954 senatorial primary.  Hamburger portrays them as the instigators of section 501(c)(3)’s “oppressive” political restrictions. ...

Does section 501(c)(3) “threaten the core of most First Amendment freedoms,” as Hamburger claims? Liberal Suppression, despite its undeniable erudition and interesting digressions into American political (and theological) thought and historical asides, falls short of making a compelling case. Hamburger is likewise unconvincing in his attempt to make a connection between the restrictions in section 501(c)(3) and contemporary forms of censorship such as campus speech codes. While Hamburger’s theoretical arguments seem to miss their mark, they are always engaging and sometimes contains gems like this:

"American religion has increasingly been aligned with popular liberal and progressive opinion—even to the point of looking for salvation not in another world but in this one, and not so much from God as from democratic government."

My new book, Liberal Suppression, argues that section 501(c)(3)’s speech restrictions are prejudiced and unconstitutional. These conclusions run counter to widespread assumptions, and it is therefore understandable that Mark Pulliam and other thoughtful readers find them difficult to stomach. All the same, it is important at least to come to grips with the realities that underlie the book’s conclusions, and Pulliam’s review fails to do this. To evaluate the prejudice, one must understand its nature; and to judge the constitutional arguments, one must recognize their breadth and strength.

The prejudice underlying section 501(c)(3) arose from theologically liberal anxieties about the speech of churches. And as traced by my book, the prejudice gradually expanded into a broader liberal fear about the speech of all sort of idealistic organizations. Indeed, these liberal concerns have expanded to include fears about the orthodox or stereotypical speech of individuals. It is therefore disappointing that Pulliam reduces my account of prejudice to a simplistic complaint about narrow anti-Catholicism.

My book, in his view, argues that section 501(c)(3) speech restrictions were added “in order to reduce the influence of the Catholic Church.” Certainly, anti-Catholicism was the opening wedge. But as my book repeatedly emphasizes, the relevant prejudices were not narrowly anti-Catholic. Already in the early nineteenth, they were broadened out to take aim at business corporations, and in the strain that is central to my book, they soon reached not only churches—Protestant as well as Catholic—but also the full range of churchy organizations, including eventually all sort of idealistic groups that were not religious. ...

[T]he prejudiced sentiment about the speech of ecclesiastical and other idealistic organizations is painfully evident in section 501(c)(3). Pulliam protests that I have not shown this. Well, consider just one phrase—the section’s limit on “carrying on propaganda, or otherwise attempting to influence legislation.” Those words were no accident. They came directly out of nativist literature—a literature that, again, reached across much of American society, from KKK klaverns to Ivy League philosophy departments. Once more, the low and the high had more in common than the latter wanted to acknowledge.

Pulliam’s review, in short, recognizes neither the broad character of the prejudice nor its societal depth. And in taking a confined view of both, he misunderstands the antagonisms that underlay section 501(c)(3) and still undergird a host of other speech restrictions. ...

Tax lawyers and First Amendment lawyers tend to have very different sensibilities about the speech restrictions. Tax lawyers usually observe that churches etc. are only slightly quieted down, for they can convey their messages through auxiliary organizations, such as section 501(c)(4) organizations and section 527 PACs. First Amendment doctrine, however, treats even the slightest restriction on political speech with apprehension. And the freedom of speech is not merely the freedom to have one’s message come out of someone else’s mouth; most basically it is the freedom to speak—to speak through one’s own mouth, in one’s own voice.

Unlike Pulliam, most Americans, on both sides of the issue, understand that section 501(c)(3) matters for speech. It is the only subsection of the Internal Revenue Code that is widely known—even by its section number—and that is no accident. The whole point of the section’s speech restrictions was to satisfy deeply felt theo-political anxieties about speech—anxieties that remain pervasive. And this is why so many Americans care. Whether they like or fear the speech of ecclesiastical and other idealistic organizations, they understand that section 501(c)(3) chills such groups.