Fidelity Charitable, one of the largest peddlers of Donor-Advised Funds, issued this interesting report about donor responses to 2017 federal tax changes (which increased the standard deduction, removing, for many people, the federal tax incentive to 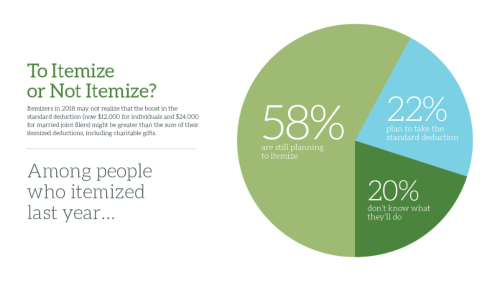 donate). Based on a survey of prior donors who itemized in 2017, more than 60% said that they planned to maintain prior levels of giving, with 19% planning to increase.  The report also finds that 20% of those surveyed aren't sure yet whether they will itemize in future years, although the report suggests that many of the respondents might not yet realize the impact of the tax changes on their situation. Thus, the promise to continue to maintain prior levels of giving may be too optimistic. The report concludes:

[T]hese findings demonstrate taxpayers may still be on autopilot from 2017 and have not updated their tax strategy to align with tax code changes. Given the confusion around the new standard deduction, it may take until they file their 2018 taxes to completely absorb the impact of the changes and potentially adjust charitable plans. Therefore tax reform’s influence on giving at large will likely not be fully known until 2019.