Yesterday I wrote about the discretion New Zealand gives to administrators to assess the benefit of policy views, and I mentioned that this is not usually the approach we follow in the United States. But this has not always been the case. 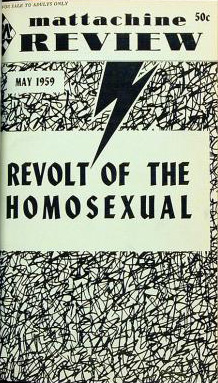 Indeed, governments in the US have a long history of abusively denying incorporation or the right to solicit donations to unpopular causes. Perhaps the best known/most egregious example is the outlawing of the NAACP in southern states in the 1950s. But there are many examples, including several that attempted to exclude organizations advocating for the decriminalization of LGBT people such as a bill that outlawed gay rights organizations that passed the US House. [Note: this post quotes materials that are offensive.]

In 1964, the US House of Representatives passed a bill that prohibited the Mattachine Society (one of the earliest gay rights organizations) from soliciting donations in the District of Columbia. The bill also required that all organizations wanting to solicit donations to establish, to the satisfaction of the district administrators, that the solicitation "will benefit or assist in promoting the health, welfare, and morals" of the community. (Incidentally, the FBI had investigated the Society a decade earlier as part of a sweeping anti-communist/internal security investigation.)

The bill came about when John Dowdy, a Representative from Texas, learned that the Mattachine Society was raising donations right under his nose. He was disgusted:

I regard this situation as highly improper. If the laws of the District of Columbia indeed do not authorize the refusal of a solicitation license or any other official recognition to a society such as this, whose illegal activities are revolting to normal society, then I feel that it is our duty to provide such authority without delay.
The Mattachine Society is admittedly a group of homosexuals. The acts of these people are banned under the laws of God, the laws of nature, and are in violation of the laws of man. I think a situation which requires them to be permitted a license to solicit charitable funds for the promotion of their sexual deviations is a bad law, and should be changed forthwith.

Eventually, a House Committee held a hearing which lasted for 2 days, covering little of substance due because, as one journalist put it "a majority of the subcommittee members chose to spend most of the day talking about what their chairman, Rep. John Dowdy (D-Tex.) kept referring to as 'perverts.'" Mattachine Society President Dr. Kameny bravely withstood the slurs to explain the Society's goals (and is now credited as the first openly gay person to testify on Capitol Hill). The ACLU also testified in opposition to the bill, stating: "The bill is rather remarkable in regard to the amount of unconstitutionality packed into two short paragraphs."

The Editorial Board of Washington Post, albeit reluctantly, also defended the Mattachine Society:

To make the solicitation of funds for an organization concerned with ideas dependent upon official approval of the purpose for which the funds are to be used would be to put a very serious crimp in the right of expression and petition. There is little need for a constitutional guarantee of free speech for ideas which already enjoy majority acceptance... We think that the organization has a clear right to make a plea for public support.

Undeterred by the constitutional objections, Dowdy's bill passed the House before it died in the Senate.