Many Countries Continue to Tighten Restrictions on NGOs 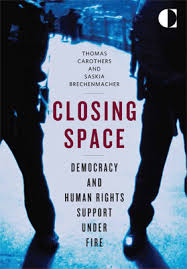 This may be because I have been writing in this area (shameless plug), but there seem to be numerous recent stories about various countries increasing the legal restrictions on nonprofits and especially nonprofits with foreign connections. Here are several examples:

In India, the government refused a license to receive foreign funds to Compassion International, a Christian child sponsorship group, forcing the nonprofit to abandon its services to 145,000 children in India after 48 years in the country. If this had been an isolated incident the government's concerns about proselytization might have been plausible, but the N.Y. Times noted that Compassion was only the most recent of 11,000 nonprofits that had similarly lost such licenses since 2014.

In Turkey, the government revoked the registration of Mercy Corps, forcing that nonprofit to abandon its efforts based on Turkey to aid Syrian refugees, according to reports from the Washington Post and other news outlets.

In Hungary, the government enacted laws to require nongovernmental organizations that receive foreign financing to publicly identify themselves and their donors in what some observers believed was an attempt to shut down nonprofits supported by George Soros, including the Central European University, as reported by the N.Y. Times.

In perhaps the most dramatic action, the President of Egypt signed a new law that imposes restrictions on all domestic nongovernmental organizations, regardless of their sources of funding, by making their work subject to approval by a new regulatory body that may be a front for interference by the country's security agencies, also as reported by the N.Y. Times.

Unfortunately there appear to be few viable ways for affected nonprofits to counter these new rules in most of the countries involved, as detailed in my forthcoming article linked to above.