Does it Violate Free Speech to Require Charities to Link to a Government Website? 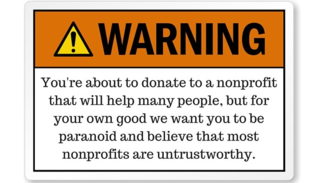 The California Legislature is currently considering a bill (AB 2855) that would mandate that all nonprofits who are soliciting donations in California to "include a prominent link [on their website] that immediately directs all consumers to the Attorney General’s Internet Web site, which contains information about consumer rights and protections and charity research resources."  The bill as initially proposed would have required soliciting charities to prominently disclose the amount of money that the organization spent on overhead and on the executive director's salary and benefits.

The bill has been sharply criticized by many nonprofits, including the California Association of Nonprofits and the National Council on Nonprofits, who argue that the bill essentially attaches a "warning label" to all organizations that would scare off donors.  The Bill's sponsor, Assemblymemeber Jim Frazier, defended the bill as a needed tool to protect worthy organizations from the "shadow cast upon them by bad actors." (In something of a jab at critics, Assemblymember Frazier paused to highlight that the "president, executive director, and chief operating officer [of the California Association of Nonprofits] made over $600,000 combined in salary and benefits.").  Other critical commentary on the bill comes from Carol Luong (Great Positive) and Gene Takagi (NEO Law Group / Nonprofit Law Blog).

Some of the critics have argued that the bill would raise a First Amendment objection by compelling speech (i.e., including a link to the Attorney General's website on the organization's webpage and in solicitation materials).  In Riley v. National Federation of the Blind of North Carolina, Inc., 487 U.S. 781, 795 (1988), the Supreme Court struck down a state mandate that professional solicitors disclose, as part of their solicitation, the percentage of funds turned over to the nonprofit.  The Court reasoned that this disclosure would necessarily change the content of the message, and the disclosure would have the anticipated and intended effect of making solicitation on behalf of certain causes less effective.

Although the criticisms have some weight as a policy matter, the California bill is arguably distinguishable from the law struck down in Riley in several respects. Most significantly, the California bill would require only a link to a website, and not the direct disclosure of any particular substantive statement or content in the course of solicitation.  See Riley's footnote 11.  This makes the compelled speech more akin to a mandate to disclose the phone number of a regulatory body or to display a license. See Dayton Area Visually Impaired Persons, Inc. v. Fisher, 70 F.3d 1474, 1485 (6th Cir. 1995) (upholding limited point-of solicitation disclosures).  Such mandates are common in the commercial & professional speech realm, although their application to charitable solicitation is much less certain.  (There are lots of unsettled issues in the regulation of charitable solicitation. In fact, we recently filed a successful First Amendment challenge to a set of local restrictions on charitable solicitation, including a licensing requirement.)

Riley and its related cases recognize a distrust of government restrictions sprung from a history of government (typically with the support of established nonprofits) creating barriers to charitable speech in order to burden disfavored causes.  Yet the Supreme Court has also recognized the legitimate objective of providing accurate information to facilitate well-informed decisions by donors.  Striking this balance is no easy matter, as Assemblymember Frazier is learning the hard way.