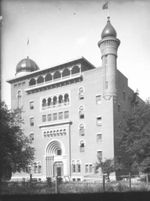 In Seventeen Seventy Sherman Street, LLC v. Comm’r, T.C. Memo. 2014-124, the Tax Court sustained the IRS’s complete disallowance of the LLC's claimed $7.15 million deduction for the conveyance to Historic Denver of interior and exterior conservation easements restricting the use of the Mosque of the El Jebel Shrine of the Ancient Arabic Order of Nobles of the Mystic Shrine. The shrine, which was built in 1906-1907 and includes many original features (including ornate stenciling, gilded bronze elevator doors, Tiffany glass, and ornate woodworking), is listed on the National Register of Historic Places and as a historic landmark by the City and County of Denver.

The Tax Court’s opinion nicely details the elements of a quid pro quo analysis in the charitable deduction context.

In this case, the Tax Court found that the LLC had received two types of consideration in exchange for its conveyance of the interior and exterior easements:

In support of its holding, the Tax Court cited an earlier case, Pollard v. Comm’r, T.C. Memo. 2013-38, in which it sustained the IRS’s complete disallowance of a deduction claimed for the conveyance of a conservation easement because the easement was conveyed in exchange for the receipt of a subdivision exemption and the taxpayer did not establish that the value of the easement exceeded the value of that exemption.

The IRS argued that the LLC was liable for either the 40% gross valuation misstatement penalty or, alternatively, the 20% accuracy-related penalty for negligence or disregard of the rules or regulations.

Accuracy-Related Penalty for Negligence or Disregard of Rules or Regulations

The Tax Court agreed with the IRS that the LLC was liable for the accuracy-related penalty because it acted negligently or in disregard of the requirements of § 170 and the regulations. “Negligence,” said the court, is strongly indicated where a taxpayer fails to make a reasonable attempt to ascertain the correctness of a deduction that would seem to a reasonable and prudent person to be “too good to be true.” And a taxpayer acts with “disregard” when, among other things, he does not exercise reasonable diligence to determine the correctness of a return position.

The LLC conveyed the easements as part of a quid pro quo exchange but reported the conveyance on its 2003 return as a charitable contribution without making any adjustment for the consideration it received in exchange. The court found that the LLC acted negligently or with disregard because it did not make a reasonable attempt to ascertain the correctness of the deduction.

The LLC argued that it was eligible for the reasonable cause and good faith exception to the penalty because it relied on professional advice. The Tax Court disagreed. Although the LLC had consulted with a tax attorney regarding the conveyance, that attorney testified at trial that he had advised the LLC that it had to reduce the value of its deduction by the consideration received in the quid pro quo exchange. The Tax Court noted that it would be unreasonable for the court to believe that at the time of the contribution or at the time of filing the LLC’s return either the LLC or its advisers believed that the contribution of the easements was an unrequited contribution or that the consideration received had no value. Consequently, the LLC's disregard of the attorney’s advice was not reasonable and in good faith, and the LLC could not rely on the professional advice of the attorney to negate the penalty.