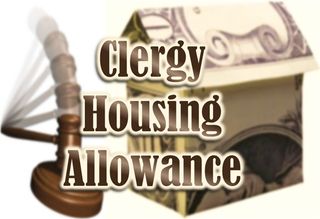 A federal District Court in Wisconsin has struck down the exclusion from gross income for vcertain housing allowances provided to "ministers of the Gospel" by Internal Revenue Code § 107 as a violation of the Establishment Clause.  As previously discussed here, the same court is also considering challenges to the church exemption from Form 990 filing and the alleged lack of IRS enforcement against churches for violating the political campaign intervention the prohibition.  As John Colombo has detailed in this space, the key question in all of these cases - including in the almost certain government appeal of the housing allowance decision - will be whether the plaintiffs have standing to even bring these claims.  For reasons Professor Colombo details, it is unlikely that they do.  As a commentator to the TaxProf Blog post on this story noted, the judge in the housing allowance case also previously ruled that the National Day of Prayer presidential proclamation was unconstitutional, only to have that case dismissed on appeal for lack of standing.  Nevertheless, this case and the other challenges are currently still alive and proceeding, although news reports state the judge has stayed her decision on the housing allowance pending appeal.

Church and State, Federal – Judicial, In the News | Permalink

Listed below are links to weblogs that reference Federal District Court Strikes Down Minister Housing Allowance as Unconstitutional: