Will they ever learn?

That was the question a friend asked. Apparently, someone decided Microsoft's proposed acquisition of LinkedIn was just too good to miss and purchased a boatload of call options just before the deal was announced. How much is a "boatload"? This much: 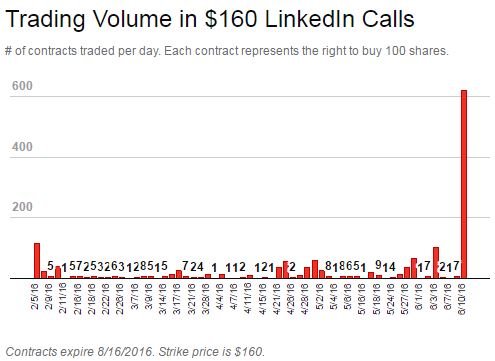 Hmm. Let's see. The average volume of LinkedIn call options back until February looks to be about 6 contracts per day according to this chart. Do you think the SEC would notice if I bought more than 600 contracts the day or two before the transaction is announced?! If I could put 600 in all caps I would have. It's just that ridiculous. Who ever this guy is, he is going to get caught. And you know what? He deserves to get caught. Just another example of someone's greed outpacing their common sense.