Another challenge to an exclusive forum provision

Edgen Group recently announced that it would be acquired by Sumitomo Corp.  No surprise, there is transaction related litigation.  A stockholder brought a case in Louisiana, the state of Edgen Group's headquarters (Edgen Complaint-LA).  You know the argument...the board has obligations under Revlon, yadayada, the board sold at too low a price, yadayada...  Well, turns out that Edgen is a Delaware Corp with an exclusive forum provision in its charter.  The provision reads as follows: 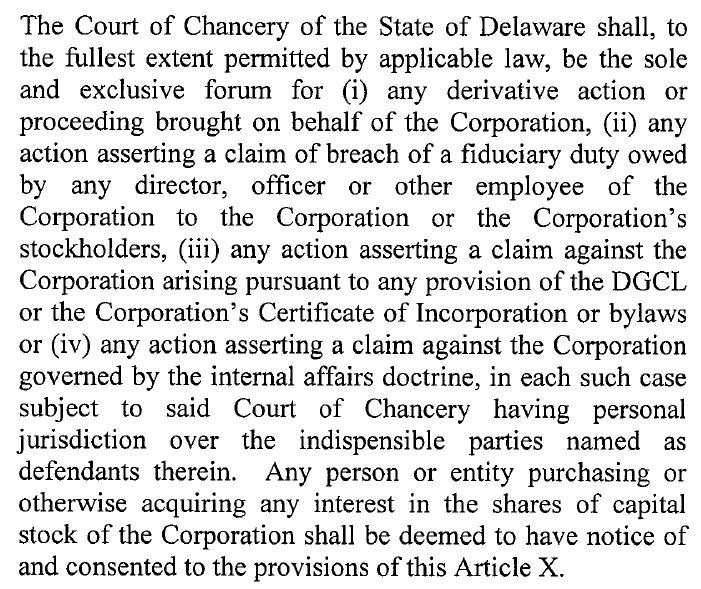 Exclusive forum provisions in corporate bylaws, you'll remember, were ruled to be legal by Chancellor Strine and the pending appeal of that ruling before the Delaware Supreme Court was later dropped.  Here, Edgen's argument to have the exclusive forum provision enforced is even stronger than in Chevron because the provision is found in the certificate of incorporation rather than the bylaws.  Now, Edgen has sued in Delaware to have the Chancery Court force stockholder plaintiffs to bring their case to Delaware (Complaint - Edgen- Delaware).  Although, it's all very interesting, what matters most in this case is whether the judge in Louisiana cares about the forum provision and whether that judge is going to enforce the provision.  He should, but there's no telling...

Listed below are links to weblogs that reference Another challenge to an exclusive forum provision: