Care of our friends over at Courtroom View Network, I've been catching up on the arguments before Vice Chancellor Strine in the Massey Shareholder Litigation.   Plaintiffs were seeking an injunction to block a merger between Massey Energy (of Upper Big Branch mine infamy) and Alpha Natural Resources.  Alpha is proposing to acquire Massey for approximately $7.1 billion.

The plaintiffs here are plaintiffs in a derivative suit that predates the merger (here's the Massey-Derivative-Complaint).  The plaintiff's suit seeks to hold the directors liable for Caremark-like failures related to the Upper Big Branch mine disaster.  While Caremark claims are typically extremely difficult to win, the facts in this case a very friendly to the plaintiffs.  If ever there was an opportunity to win on a Caremark/good faith claim, it would be with these facts - a rescidivist mine safety violator, a CEO who is on record essentially telling his subordinates to ignore safety rules if it were to slow production ("ignore them and run coal"), and the like.

All of this sounds good from the plaintiff's perspective.  Of course, the proposed merger throws a wrench into the works for this derivative case.  Under well settled law (e.g. Lewis v Anderson), plaintiffs in derivative claims will lose their standing in the case once the transaction closes and the plaintiffs are no longer shareholders of Massey.  The only party with standing for a derivative claim following the closing of the transaction will be the then stockholder of Massey - Alpha.  Of course, the plaintiffs and their attorneys desperately want to avoid that outcome.  I''ll let you decide why.

The plaintiff's basic claim is that if the merger is allowed to close without carving out the derivative claims related to the Upper Big Branch mine and placing them into a trust to be litigated (presumably by the same attorneys now litigating the matter), then the corporation/shareholders will suffer a loss.

The Vice Chancellor was not at all convinced that Alpha would not pursue the derivative claims on its own, or at the very least use them to negotiate some sort of settlement with the former directors of Massey. Indeed, at one point during the plaintiffs argument Strine noted that Massey is facing potential liability from many different angles relating to the UBB disaster - victims' families, government regulators, etc. and that if the plaintiffs pursued their derivative case with vigour they might in fact cause more damage to the corporation by proving the case for third parties.  He suggested that it might be better for the corporation - and intimated that Alpha might already be thinking this way - to wrap up all the third party litigation to get a sense of the total liabilities before coming back to the former directors for a settlement. That seems sensible.

I think the plaintiffs are characterizing their claim as an "easy" Caremark claim.  Although the facts are good for them, I think it's best to approach any Caremark claims with real modesty.  Few of them are "easy" claims to win.

At one point, counsel for the plaintiffs tried a "the whole world is watching Delaware" argument, but that didn't go over well and generated a mild rebuke and statement from Strine that the world shouldn't feel sorry for Massey shareholders.  If anything they are the least sympathetic victims in this matter.  If - as the plaintiffs argue - it was well known that Massey regularly skirted safety rules in the chase for profits, then why should the court show people who invested in "loathesome activities" much by way of protection?

Not surprisingly, Strine declined to issue the requested injunction.  I'll post the 79-page opinion when it is available.  (Here's the Massey/Alpha opinion.) 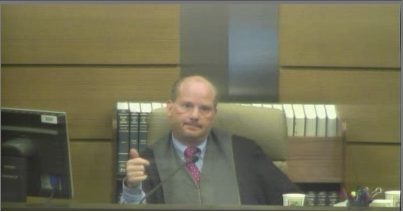 "Anyone named Leahy Judge has to be rich ..."

"Delaware directors cannot be exculpated from violations of the law.  Our law is very clear."

"The least sympathetic victims here are the stockholders, on whose behalf the directors may have violated the law."

"If a jury finds you're a doofus ..., then the derivative claims are worth nothing."

VCS: "... I'm still wondering about what to do with the extra four and half months I have ... because I was told I wouldn't have to even worry about this argument..."
Counsel: "I'm sorry, I don't follow."
VCS: "Well the world was supposed to end...rapture...now we've got another four months or so..."

"Why would Alpha stockholders not kick the booty of their board if their board doesn't go after [former Massey directors]?"

"Let's not act like this is about miners not be able to file tort suits against Blankenship or Bobby Inman, because it's not.  It's about the corporate law."

Listed below are links to weblogs that reference Massey/Alpha and derivative claims: