OK, so I listened to the arguments regarding the Airgas bylaw, courtesy of our friends at Courtroom View Network.  While I'm terrible about predictions - especially about the future - I'll venture a guess that Air Products had the better of the arguments today.  I mean, if Ted Mirvis is relying on law professors to make his case, he must be leaning on a pretty thin reed.

Really, the reason why I think Air Products got the best of the argument today is that in order for Chandler to rule in favor of Airgas' position, he will have to rule that when Airgas drafted its certificate of incorporation, it did not mean that directors should serve "a term expiring at the annual meeting of stockholders held in the third year following the year of their election" but that they meant 3 years. 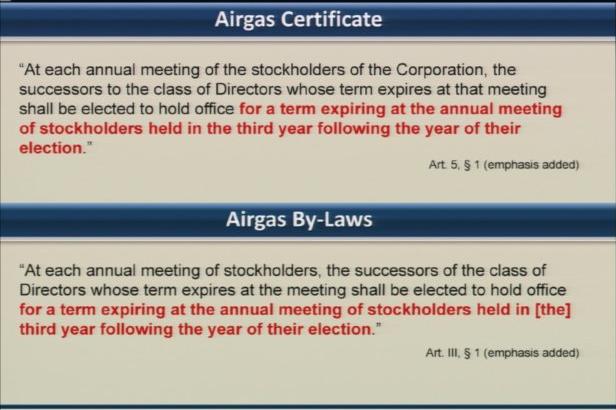 Air Products' counsel had the better argument here.  Summed up as: " 'Oh c'mon your Honor, you know what we meant' is not a recognized principle of contract or charter interpretation."  If Airgas wanted its directors to have a three year term, it would have, as other corporations have, written that explicitly into its charter.  But it didn't.

Airgas would like board to read language below and come to the conclusion that X=Y.  I don't think the court will.  A"term of three years" is not the same as serving until "the annual meeting held in the third year following the year of the their election."  It's pretty plain.  One might not like it, and I'm sure that plenty of lawyers drafting proxy statements at 3am have happily conflated the two in order to get home before sunrise, but they are still not the same. 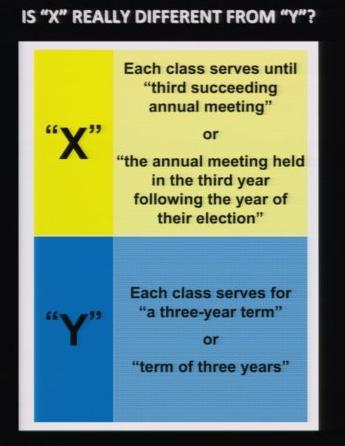 I think coming to grips with the implications of this was behind some of Chandler's early discomfort with Air Products' argument.  I can imagine that he was going over in his head what the result would be of his ruling in favor of Air Products -- a full employment ruling for corporate law departments around the country as they scurry to tighten the language in the provisions in their charters.

On the other hand, if Chandler were to go with the "typical understanding" of the length of the term of a staggered board rather than a reading of the plain text, then he would do something that he would never do in the context of, for example, interpretation of a merger agreement.  I tell my M&A class that Delaware adheres to a "big boy" rule - courts assume counsel is smart enough to bargain for the provisions that they want and courts will not interpret beyond what is in the plain language -- think Alliance Data Systems v Blackstone.

If Chandler were to side with Airgas in their argument that would require him to assume that Airgas did not mean what it wrote in its charter.  That's a hard sell and, I suspect, would result in an immediate appeal to the Supreme Court.

Beyond that, the old bylaw provisions permitted Airgas to advance its meeting date so that meetings could be separated by a window as little as seven months showed that, until the litigation, Airgas itself didn't interpret its charter to require an annual meeting occur at least 12 months after the previous meeting. Their current interpretation seems to be one that is convenient given the current litigation.

Anyway, it's going to be tough for Chancellor Chandler.  I think he's going to have to rule for Air Products - he may try to hedge a bit, but I don't think he really has any choice.

And, I think that the result will be  howls of pain from attorneys all over the place - people will be quoted saying things like "worst since Van Gorkom or Omnicare" but they will be wrong.  In the end, though, we'll all survive.  Lawyers will be more attentive to their drafting and will specify in their charters that the term for a director on a staggered board is 3 years and not some other term.

But, maybe they should have gone through that exercise the first time around.

Anyway, I guess all this puts me at odds with the conventional wisdom - Airgas' price is down $1 today (I won't get into Fischel's expert opinion this afternoon and the EMH) and Bloomberg seems to suggest it will go the other way.

Listed below are links to weblogs that reference Advantage: Air Products: