The article referenced by Beth Burch below reads like a who's who of mass tort and class action litigation.  But really the reason for this post was the nerdy title.

Toyotal Lawsuits - behind the scenes at an MDL

Here is an interesting article about the JPMDL oral arguments in the Toyota lawsuits: Lawyers Play Speed-Date in Toyota Tussle.

The issue the article discusses (rather disdainfully) is who will be the lead lawyers in the Plaintiffs' Management Committee because those lawyers will lead the litigation, garner the most fees, etc.

More needs to be written about procedures to allocate power among plaintiffs attorneys as well as fees, a process that could use more process.

Note too the names raised in the article: Mark Lanier (Houston based) who tried the Vioxx cases, Mark P. Robinson Jr (who according to the article was involved in the Ford Pinto litigation in the 70's), and Mark Geragos (who is best known for representing Michael Jackson).

His article, Exorcising Toyota’s Demons, was published today in the National Review online.

Array of Lawsuits Expected Against Toyota

Professor David Owen (South Carolina) and I are quoted in a report tonight on All Things Considered on National Public Radio; the audio report -- Toyota Seen Facing Multiple Lawsuits, by Wendy Kaufman -- will also be posted on the web tonight at 7:00 p.m. EST.

The Economist suggests a connection between Toyota's continuing manufacturing problems and a corporate culture that fails to raise problems because it is overly deferential.  I have separately heard that Asian airplane co-pilots have had to be specifically trained to overcome their traditional cultural deference and challenge the actions of pilots, if warranted, in emergency situations.  Here's an excerpt from article:

Toyota’s problems are its alone, but they highlight broader failings in Japanese corporate governance that make large companies particularly vulnerable to mishandling a crisis in this way. Such firms typically have a rigid system of seniority and hierarchy in which people are reluctant to pass bad news up the chain, thus keeping information from those who need to hear it in a misguided effort to protect them from losing face. In many firms, including Toyota, family ties make challenging the boss all but impossible. Any attempt to short-circuit the hierarchy is deemed an act of disloyalty and a violation of the traditional consensual corporate culture. Groupthink becomes entrenched because there is so little mobility between companies: hiring from outside is thought to disrupt a firm’s internal harmony, and an executive willing to move will be stained as a disloyal “job-hopper”. This further hinders firms’ ability to take bold, decisive action. The preference for harmony crowds out alternative viewpoints.

The ABA Journal article is here.  Apparently class actions have already been filed by consumers who claim that their cars are now worthless.  The article quotes the Wall Street Journal quoting Richard Nagareda (Vanderbilt)

"Since it will be hard to represent a nationwide class," he said, "I don't think this litigation will be a big moneymaker for plaintiffs." 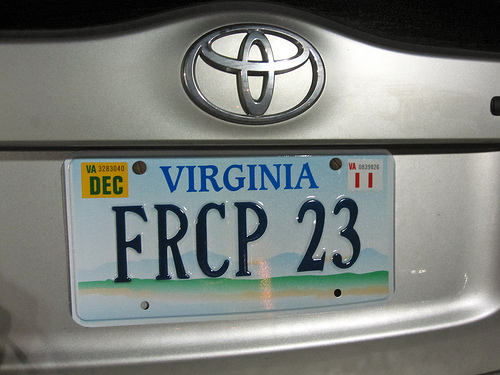 Photo of Ted Frank's car -- Ted is founder of the Center for Class Action Fairness and former fellow at the American Enterprise Institute.  (Thanks to Ted for permission to post here.)

The U.S. Treasury Department is negotiating with more than a dozen state attorneys general to roll back two key features of General Motors Corp.'s bankruptcy plan that would have wiped out billions of dollars in potential claims from car-accident victims and closed auto dealers.

The discussions show how the federal government's GM rescue is brushing up against the limits of its ambitious legal approach, which attempted to use the Bankruptcy Code to override many state legal contracts and protections.

This could ultimately expand the cost of GM's $60 billion bailout, though government officials say it
shouldn't delay the emergence of a "new GM" from bankruptcy protection.
.

The Recorder reports that Alameda County Superior Court Judge Robert Freedman has preliminarily approved a 49-state class action settlement between General Motors and plaintiffs over auto repairs. The settlement is worth approximately $150 million to car owners even though it reportedly compensates them for only about 50% of the repairs. Here’s an excerpt:

Under the settlement, the class would be split into three groups based on the cars they drive, the type of engine and the kinds of repairs performed. Plaintiffs would collect $50 to $800 per repair, with speedier repairs generating larger reimbursements.

The settlement does not cap the total amount GM would pay class members, though it does set maximums in other areas: court-approved attorney fees of up to $16.5 million, litigation expenses of up to $1.55 million and total named plaintiffs' incentive awards of up to $140,000.

Lawyers in California and Missouri first filed suit against GM about five years ago, claiming the auto manufacturer used an engine coolant in factories that created performance problems in more than 30 models of GM cars, including the Oldsmobile Cutlass and Chevy Impala. All of the cases targeted Dex-Cool, a coolant GM started using with the 1995 model year. The suits asserted claims for breach of warranty and violations of unfair business practices statutes.

GM was represented by Robert Ellis, a Chicago-based partner at Kirkland & Ellis. Through a Kirkland spokesman, Ellis referred calls about the settlement to a General Motors spokesman, who declined to comment.

Earlier in the litigation, plaintiffs attorneys experienced some bumps along the road to class certification.

Four years ago, Alameda County Superior Court Judge Ronald Sabraw denied a motion seeking class certification to get declaratory judgment on one issue in the California piece of the litigation.

In 2006, after Sabraw retired from the Alameda County court, the same plaintiffs filed a motion seeking certification of a California class to establish liability. Judge Freedman denied that but said the plaintiffs could bring a renewed motion supported by additional evidence. The plaintiffs asked to certify a California class last year for a third time, supporting it with affidavits from four expert witnesses. That time, Freedman granted class certification.

Earlier this week Ford recalled some 225,000 vehicles ranging in make and model over a concern about a faulty cruise control deactivation switch. Here’s an excerpt of the story from Forbes:

Ford discovered the wiring harnesses problem while repairing a vehicle in its own fleet and said no accidents or injuries have been caused by the problem.

Ford said not all vehicles in those model years had the faulty wiring harness installed, and it will contact affected owners.

Article in the ABA Litigation News -- Maryland Expands Product Liability for Unmanifested Defects, by Brian A. Zemil.  Here's an excerpt:

Rejecting the majority rule adopted by other states, Maryland’s highest court has held that unmanifested product defect claims can be actionable even when the plaintiff fails to allege personal injury.

In Lloyd, the Maryland Court of Appeals reinstated a class action brought by plaintiffs who had sued auto manufacturers that sold cars allegedly containing defective seatbacks—even though the defects had yet to manifest themselves, let alone cause actual injury to the class members. Because the flaws could potentially cause death or serious injury, the court held that the cost of repairing the seatbacks was actionable in tort and contract and as a consumer protection claim.

The decision forms “part of a hotly contested nationwide dispute over whether a product that has a possibility of malfunctioning is defective such that it can support a consumer-type product liability class action claim for economic loss,” says Scott L. Nelson, Washington, DC, former Co-Chair of the Section of Litigation’s Class Actions and Derivative Suits Committee.

Article on cnn.com --  Ford recalling millions of vehicles because of faulty switches.  Here's an excerpt:

Two years after his wife of 34 years died in a fire, an Iowa man continues to maintain the blaze was started by a faulty cruise control switch under the hood of her 1996 Ford F-150 pickup -- while it was parked in the garage attached to his home.

Although Ford has denied -- and continues to deny -- the switch started the fire that killed 74-year-old Dolly Mohlis in 2005, the company recently settled a lawsuit brought against it by Earl Mohlis. And last week, it issued a recall of an estimated 3.6 million vehicles -- bringing the total recalled over the past decade to more than 10 million -- every single car and truck built with a similar cruise control switch.

DaimlerChrysler AG's Chrysler Group said Friday it was recalling more than 60,000 vehicles to reprogram a brake system computer to avoid the loss of antilock brakes and traction control.

The automaker said that in a small number of vehicles, the instrument panel warning lamps might illuminate and be followed by the loss of its Electronic Brake Distribution, antilock brake system, traction control and speedometer functions. That could lead to a loss of vehicle control.

Article in the Los Angeles Times -- Ford to pay $15 million in Explorer rollover death, by Bloomberg News "Ford Motor Co. must pay $15 million for the death of a teenager in a sport utility vehicle rollover accident, a Tulsa, Okla., a jury decided."

Article in today's Los Angeles Times -- Ford, Mazda SUVs probed after 8 fires, by Bloomberg News: "Ford Motor Co.'s Escape and Mazda Motor Corp.'s Tribute sport utility vehicles are being studied by U.S. regulators over complaints of fires in the engine area after they are turned off."

Article in the Los Angeles Times -- Ford loses appeal of $82.6 million Explorer rollover judgment, by Bloomberg News.  The brief article notes: "A San Diego jury in June 2004 awarded Benetta Buell-Wilson and her husband $369 million, including $246 million in punitive damages. An appeals court reduced the judgment to $82.6 million in July."  The California Supreme Court refused to review the appellate court decision, and Ford plans to appeal to the United States Supreme Court.


This blog is an Amazon affiliate. Help support Mass Tort Litigation Blog by making purchases through Amazon links on this site at no cost to you.