As our readers tend to know, MDLs prioritize efficiency.  That is, after all, what the statute was designed to do--promote efficient resolution.

But what's often unknown is the best way to promote efficiency and whether efficiency might have unintended consequences.

Back in 2019, the American Bar Association (ABA) called for courts to appoint special masters regularly in MDLs. Its report claimed that multidistrict proceedings in particular could “benefit from specialized expertise,” and that “[e]ffective special masters reduce costs by dealing with issues before they evolve into disputes and by swiftly and efficiently disposing of disputes that do arise.”

The ABA’s resolution thus urged judges to appoint special masters in complex cases at “the outset of litigation” and permit them to do everything from oversee discovery and pretrial litigation to conduct trials based on parties’ consent, allocate settlements, and administer claims. Failing to do so, it cautioned, “[r]egardless of the reason,” “may disserve the goal of securing ‘a just, speedy, and inexpensive determination.’”  Neither this reproach nor the ABA’s empirical claims included empirical support, however.

My co-author, Margie Williams, and I set out to investigate. But we didn't just look into special masters, we considered everyone that judges allocate power or authority to in MDLs: magistrate judges, claims administrators, lien resolution administrators, and even banks. We posted our article, Judicial Adjuncts in Multidistrict Litigation, on SSRN today and the paper will appear in Columbia Law Review this December. But for those of you who'd prefer the quick version, here's a summary of our findings:

Proceedings with special masters lasted 66% longer than those without them.

Using a duration model allowed us to investigate this statistic further by controlling for a proceeding's outcome (settlements uniformly took longer), personal-injury claims (which likewise took longer), and the number of actions in a proceeding (the more actions, the longer the proceeding lasted).

Nevertheless, appointing a judicial adjunct of any kind made the proceedings continue longer than they otherwise would, all else being equal.

Designating a judicial adjunct meant that the proceeding was 47% less likely to end. And for every additional adjunct appointed, there was an 11% decrease in the probability of a proceeding ending.

Of course, magistrate judges are salaried court employees. Appointing them does not add to parties' cost. But parties must pay for special masters, claims administrators, etc., which raises questions about costs. After all, Rule 1 isn't just concerned with efficiency; it's concerned with securing "the just, speeding, and inexpensive determination of every action and proceeding." Here, however, we ran into a roadblock:

Compensation information was either undisclosed or affirmatively sealed for 62% of private adjunct appointments.

Some of the payments that we could unearth ran into the millions. In the Actos proceeding, for instance, Special Master Gary Russo charged over $4.7 million and Deputy Special Master Kenneth DeJean charged over $1.3 million. And special settlement masters Ken Feinberg, Michael Rozen, John Trotter, and Cathy Yanni collectively charged over $9.4 million to administer the Zyprexa settlement.

Even though we couldn't always identify the amounts charged, we were able to discern that plaintiffs alone bore the costs for 54% of private adjuncts, meaning that in over half the the appointments, defendants did not contribute.

To try and figure out why judges appoint judicial adjuncts if proceedings with adjuncts cost more and last longer, we conducted confidential interviews with plaintiff and defense attorneys, special masters, claims administrators, magistrate judges, and district court judges with a wealth of MDL experience.

Interviews revealed two competing narratives. In one version, courts outsourced to effectively manage complex cases behind the scenes and closely monitored those appointed. In the other, repeat players in both the bar and the private-adjunct sector came to mutually beneficial arrangements that exposed real-life problems over capture, self-dealing, bias, transparency, and ad hoc procedures.

You'll just have to read the paper for those juicy tidbits (and there are plenty). They can be found in Part IV.

We did create some pretty fascinating data visualizations that were just too detailed to work in the article, so I thought I might share those with you here instead. I'd just ask that before you quibble with our categorizations that you read the caveats and explanations that we provide in the paper itself. But of course we'd welcome feedback.  The following visualization provides what I think of as a snapshot of the lifecycle of an MDL, with critical events like centralization, settlement, and dispositive decisions included alongside judicial adjunct appointments, which are also color coded.  A different version of the graphic that's less "busy" appears in the paper. Clicking on the graphic will bring up an interactive version that allows you to see more details. 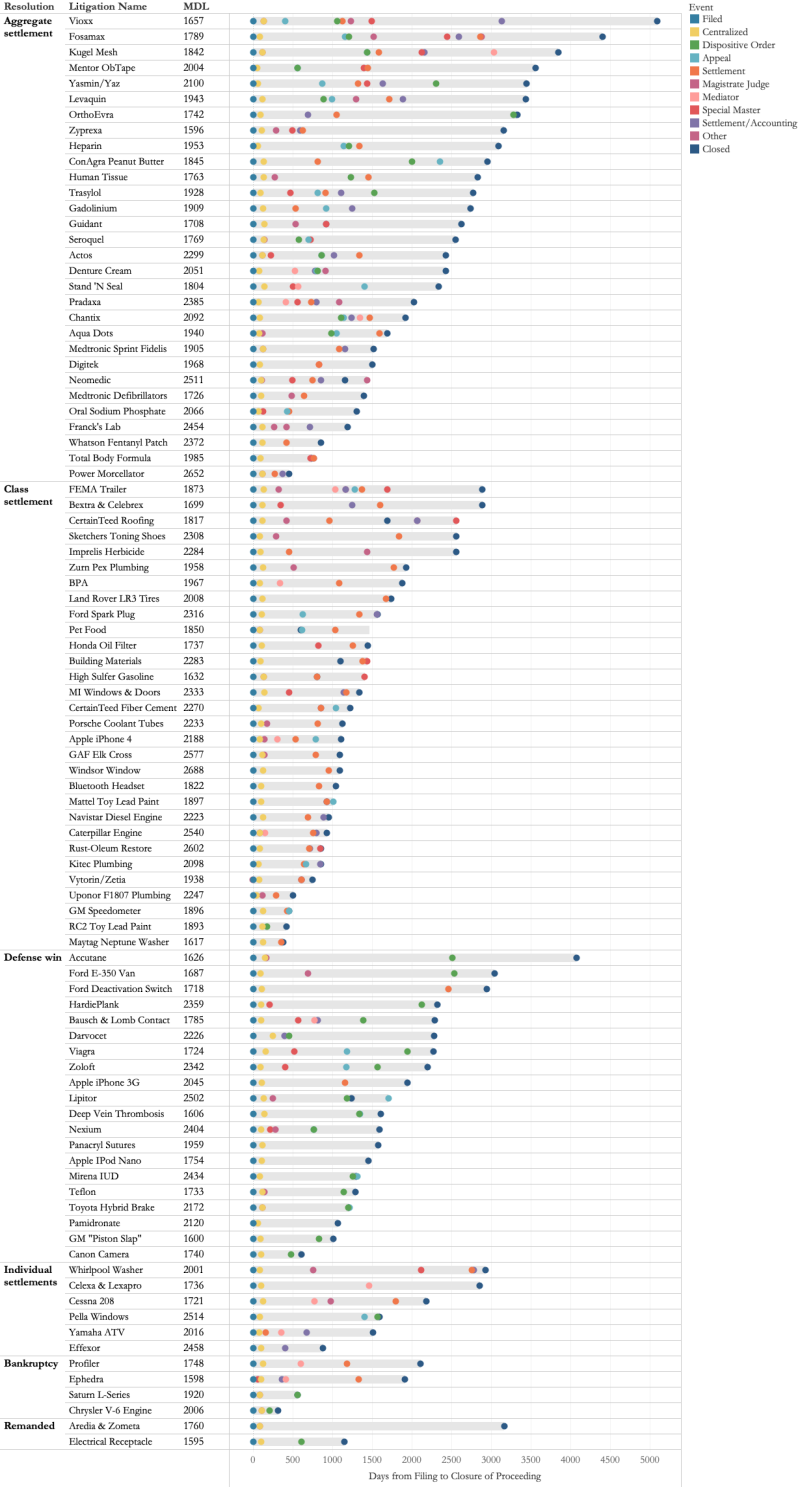 As our readers surely know, it's difficult to pinpoint all of the factors that make a proceeding complex. Nevertheless, we tried!  Of course, we can't measure things like the difficulty of proving causation, but we did code for the way the proceedings were resolved (as judged by the majority of the actions--some individual settlements may have occurred, for instance, even in proceedings we marked as "defense wins"); whether the proceeding included personal-injury allegations, whether the defendants were related to one another (e.g., parent-subsidiary), and the number of actions in the proceeding.

Here are two: First, we use the official closed date rather than the settlement date because many of our adjuncts were appointed post-settlement to help administer the settlement program. Thus, the date the the court formally closes the proceeding remains an important milestone. (You can still see settlement dates in the above graphic.)

Second, in some proceedings, the number of actions filed on the court docket may well undercount the actions affected by the MDL.  This is because global settlements often include state-court plaintiffs and unfiled claims, judges have begun to create shadow dockets, and parties institute tolling agreements so that claims do not actually appear on the docket. Unfortunately, systematic data is not publicly available to remedy these deficiencies.

Even with those caveats in place, you might find this interesting--I certainly did: 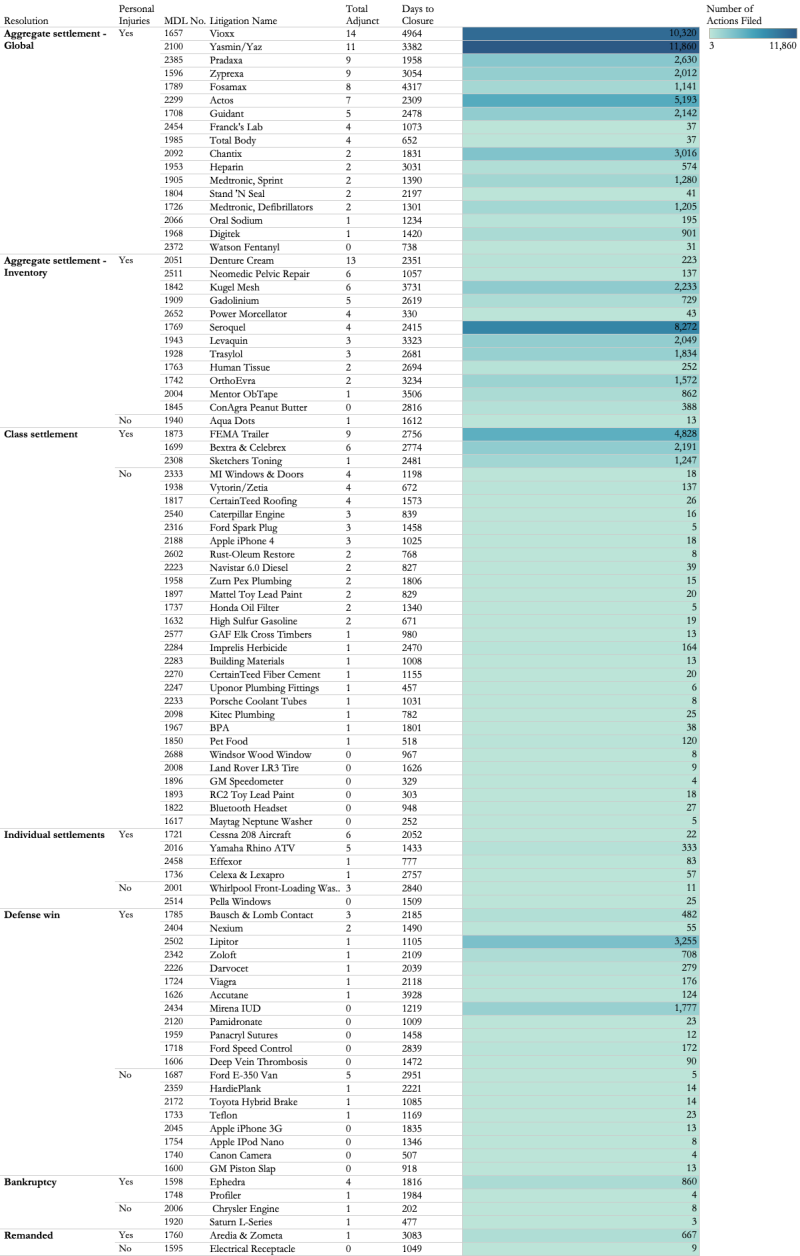 Again, clicking on the graphic above will open an interactive version.

I hope this post is enough to interest you in the paper itself. We offer a number of theoretical contributions and suggestions to help chart a path forward that may interest MDL judges and attorneys.

As always, we welcome your comments.