For judges, lawyers, and even academics toiling away in the world of mass torts, getting a handle on the big picture can be tough.  I've seen many empirical claims made when it comes to the push for or against creating federal rules specific to mega-MDLs, all of which are mass torts.  Yet, most lack real, empirical data.

For the past six years, I've been collecting data on all of the products-liability proceedings that were pending on the MDL docket as of May 2013. (Yes, yes, I live a thrilling life.) Like a hoarder, I've squirreled away data on Lone Pine orders, Daubert motions, class-certification motions, plaintiff fact sheets, summary judgment motions, census orders, class action settlements, private aggregate settlements, and on and on and on. Those data-collection efforts have culminated in a book that is out today, Mass Tort Deals.  There is ton of information in the book's appendix on all of the information I just mentioned.  Here's a way to Download Index to Data.

One thing I noticed along the way was that neither Pacer nor Bloomberg Law allow you to search inside the text of MDL dockets, which can be long and unwieldy in and of themselves, as many of you know.  So, with the help of the wonderful UGA Law School IT department, I've created a free website that allows you to search the text of the thousands of MDL documents that I've been stockpiling for the past six years.  It includes all of the documents that I relied on for the book and I will continue to update it periodically.

As for the book, Mass Tort Deals marshals this wide array of empirical data to suggest that the systematic lack of checks and balances in our courts may benefit everyone but the plaintiffs. Multidistrict proceedings, which place a single judge in charge of similar lawsuits filed across the country, consume a substantial portion of the federal courts’ civil caseload.  As the figure below shows, many MDLs are product liability proceedings (for an interactive version, click here): 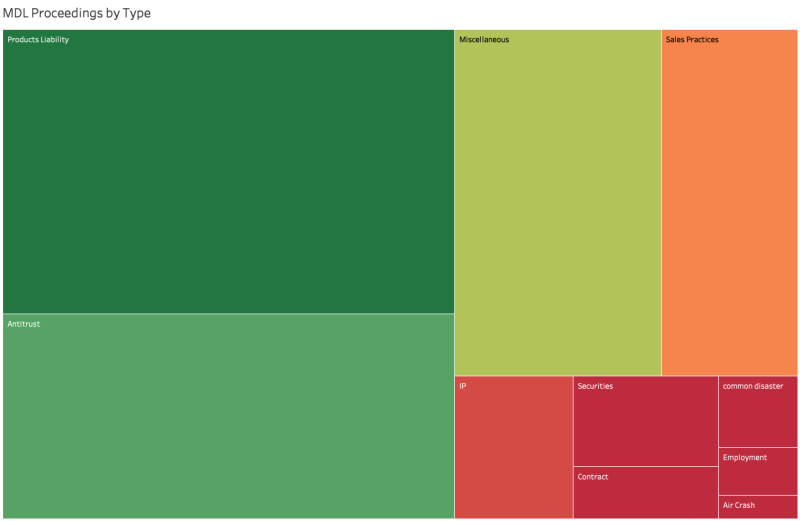 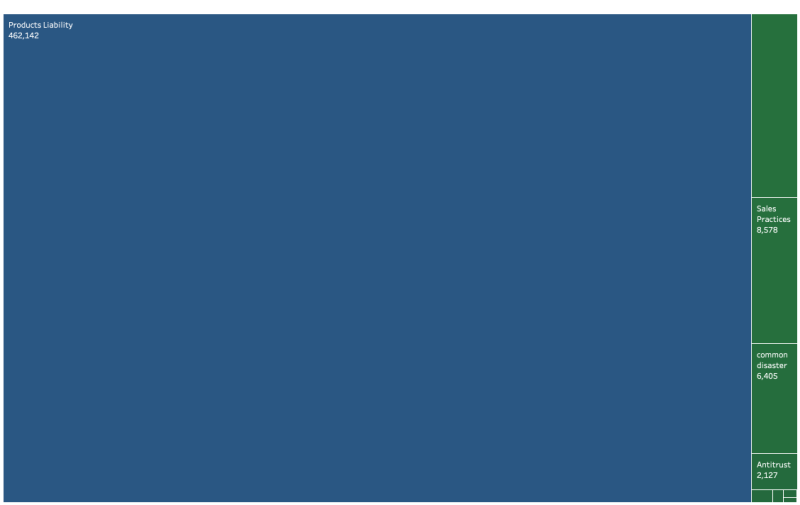 Of course, most of these product-liability proceedings are not run-of-the-mill disputes. Litigation over products like pelvic and hernia mesh, opioids, Johnson & Johnson’s baby powder, Roundup, and hip implants are headline-grabbing media magnets.

Federal judges certify a small handful of these proceedings (principally those without personal injuries)  as class actions, which affords them judicial safeguards. But as tort reform has made its way into civil procedure, it has effectively clamped down on class actions.  As you can see from the graphic below, most product-liability proceedings within my dataset ended in private, aggregate settlement (click here for an interactive version): 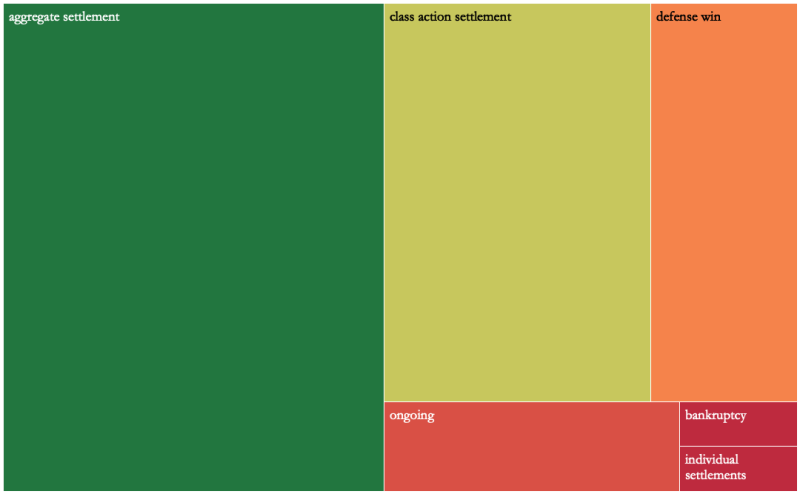 As readers of my work know, I've voiced some concerns with adequate representation and repeat players in MDLs. Judges and academics have long raised questions about arms-length bargaining and adequate representation in the class-action context, even though Rule 23 builds in some safeguards. In class actions, for example, judges have the authority to appoint class counsel; consider whether counsel adequately represents class members; ensure that any class settlement is fair, reasonable, and adequate; and award class counsel’s attorney’s fee.

But worries about collusion, self-interest, and overreaching don’t disappear just because mass litigation can’t be certified as a class action. Instead, we might worry more because the judge lacks any clear-cut authority to police the proceedings in the same way.
Those concerns can be exacerbated if repeat players exist leadership positions, which they do. The graph below shows who those players are and you can click here for an interactive version: 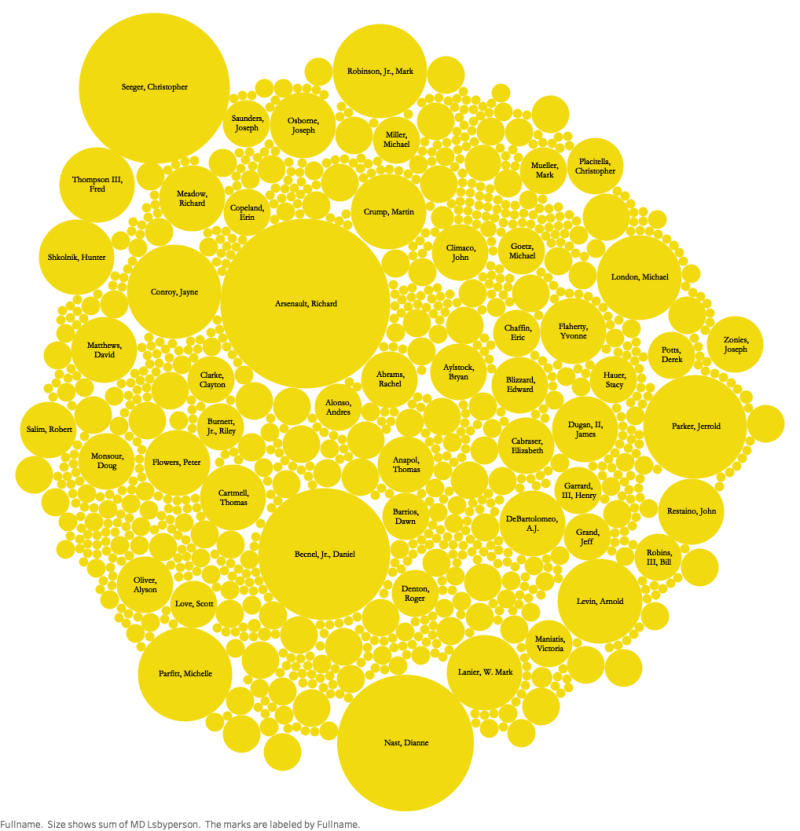 Some judges appoint more lead lawyers than others, as the graphic below illustrates (click here for an interactive version): 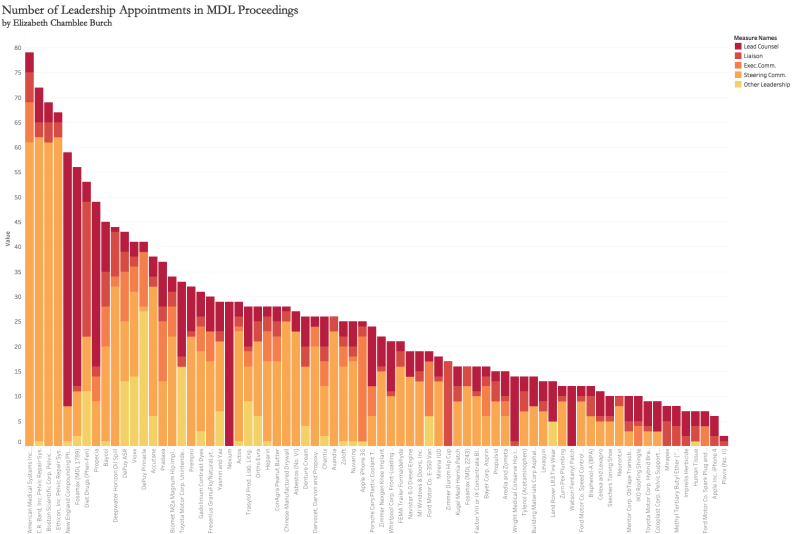 That repeat players exist isn’t surprising in and of itself. Attorneys specialize all the time. It might be that they use their expertise to generate better outcomes for their clients. But playing the long game may also mean that repeat players develop working relationships with their opponents such that each side can use private settlement to bargain for what matters to them most from a self-interested standpoint.
For corporate defendants and their lawyers, this means ending the litigation with the least cost. For lead plaintiffs’ lawyers, this typically means attorneys’ fees—specifically common-benefit fees (the fees they receive for the work they do on behalf of the group as a whole).  As Chapter 3 of Mass Tort Deals details, repeat-player attorneys are prevalent in leadership positions on both the plaintiff and defense side in products-liability multidistrict proceedings.  Here's a look at the major law firms involved in these proceedings on both sides (interactive version): 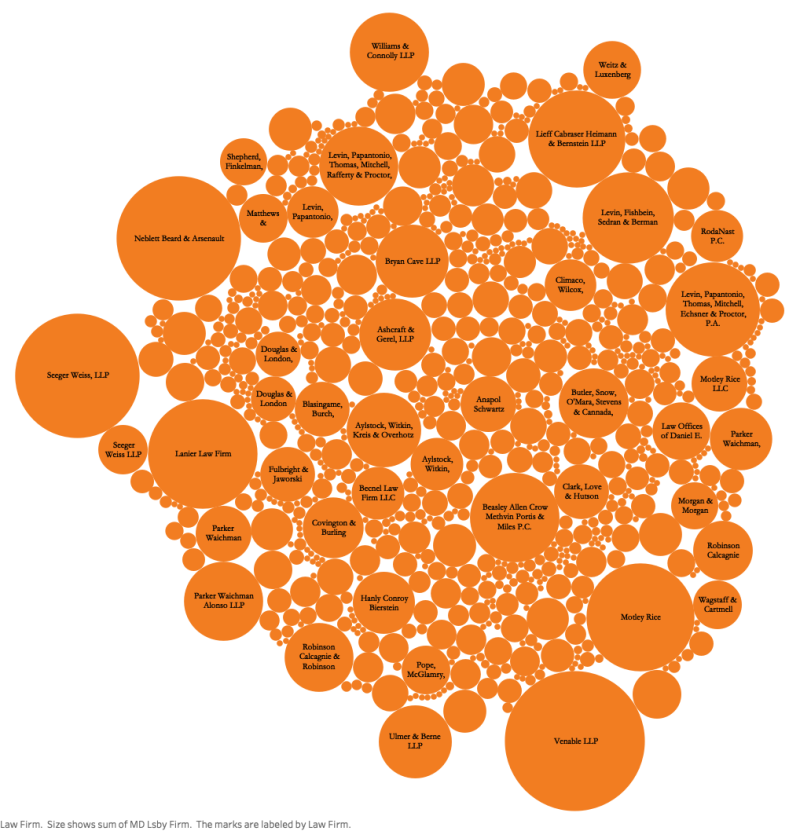 To the extent possible given that most of the mass-tort settlements were private, Chapter 2 examines the deals that these repeat players negotiated with one another. After confirming that one of the top five most connected repeat players participated directly in each settled proceeding’s leadership, I identify the provisions within those settlements that are arguably more beneficial to plaintiffs’ lead lawyers or to the defendants than to the actual plaintiffs.
How do these provisions work? To stymie the lawsuits against them, for example, defense corporations include settlement provisions designed to push as many plaintiffs as possible into the settlement program. These "closure" clauses might require plaintiffs’ lawyers to recommend that all their clients accept the settlement offer and, if the client refuses, take steps to withdraw from representing that client.
To enter a settlement program, plaintiffs must typically dismiss their lawsuit. But, as I explain in Chapter 5, those plaintiffs often don’t know what, if anything, they will receive under that program. So, plaintiffs may be giving up their lawsuit in exchange for no compensation whatsoever.
For example, in litigation over the acid-reflux medicine Propulsid, out of the 6,012 claimants who entered into the settlement program, only 37 received any money. The rest received nothing, but had already dismissed their lawsuit as a condition of entering into the program. Those 37 plaintiffs collectively received little more than $6.5 million.
The lead plaintiffs’ lawyers in Propulsid, however, negotiated their common-benefit fees directly with the defendant, Johnson & Johnson, and received $27 million. Much of the remaining funds then reverted back to Johnson & Johnson.
Lead plaintiffs’ lawyers in Propulsid announced that they were creating a template for all future deals. Chapter 2 of Mass Tort Deals shows that they did exactly that.
Considering settlements that occurred over a 14-year span, Chapter 2 shows that every deal contained at least one closure provision for defendants. Nearly all settlements also contained some provision that increased lead plaintiffs’ lawyers common-benefit fees. Bargaining for attorneys’ fees with one’s opponent is a troubling departure from traditional contingent-fee principles, which are designed to tie lawyers’ fees to their clients’ outcomes.
In short, Mass Tort Deals raises the concern that as repeat players influence practices and norms in mass torts, they may undermine plaintiffs’ ability to freely consent to the settlement. That may or may not affect the substantive outcome. Unfortunately, most of the data on how plaintiffs fared under settlement programs was not publicly available.
Rules for MDLs?

Given my qualms about what lawyers are doing (Chapter 2 and 3) and what judges are doing (Chapter 4), should we implement rules for MDL proceedings? Not necessarily. Our system needs a makeover, yes.  But Chapter 6 uses basic economic and social principles as the bedrock of reform.

I suggest ways in which we can build opportunities for dissent and competition into the fabric of multidistrict proceedings and incentivize lawyers to use them.

But doing so relies on judges. Educating judges and encouraging them to select leaders via a competitive process, tie leaders’ fees to the benefits they confer on plaintiffs, open the courthouse doors to hear about those benefits (or not) directly from the plaintiffs, and remand those litigants who don’t want to settle can allow the vibrant rivalries within the plaintiffs’ bar to see to it that dissent and competition flourish.

As attorneys object and compete, they are likely to divulge new information, thereby equipping judges with pieces of the puzzle that they currently lack. In short, Chapter 6 explains how arming judges with procedures that better align plaintiffs’ attorneys’ self-interest with their clients’ best interest equips courts to hold parties accountable even without legislation or rulemaking.

From diagnosis to reforms, my goal in Mass Tort Deals isn’t to eliminate these lawsuits; it’s to save them.