Does marijuana make you hungry?

I've always thought one of the strangest things about the DEA's insistence that marijuana has no currently accepted medical use is that one of the claimed medical uses is as an appetite stimulant.  When I cover CSA scheduling of marijuana in my Controlled Substances class, I sometimes joke about whether we really need scientific studies to know that marijuana can make people hungry.

The DEA's position, of course, is that there isn't enough evidence to say that marijuana can stimulate the appetites of cancer and AIDS patients.  (The synthetic-THC drug Marinol, on the other hand, has been officially determined to make people hungry.)

Though I don't think it will be enough to satisfy the DEA, today brings some new scientific evidence of (and explanation for) marijuana's effect as an appetite stimulant.  The blog Toke of the Town reports:

In a new study published this week in Nature Neuroscience, European researchers claim to have proven that smoking weed does, in fact, give you the munchies. Beyond that, they appear to have isolated the specific region of the brain that is affected by THC consumption, and identified the process through which that desire to eat an entire box of Lucky Charms at 2am comes from.

"Medical marijuana advocates in Colorado give pot to pets" 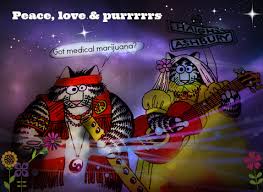 The title of this post is the headline of this notable story via UPI.  Here are excerpts:

Some medical marijuana enthusiasts in Colorado are taking the "holistic approach" by giving their pets pot to deal with pain.

As animals age, it’s harder for them to do things like fetch, run and play, prompting some owners to prescribe marijuana to help fix the problem. "Arthritis is the really big thing for our pets as they get older, for being able to move about and get their exercise,” pet owner Barbara Novey told local Fox affiliate KXRM.

"So medication of any type that will help someone that is natural will help their pet as well, and I think that maybe our pets can help us purge this reefer madness mentality and realize that it's not the dangerous drug that you think it is."

Novey thinks pot is therapeutic for her pooch, but NorthWest Animal Hospital veterinarian Dr. John Sudduth asserts that giving a dog medical marijuana can be deadly. "There just hasn't been enough research that has been presented to the medical community that would inform us to how to safely use medication such as marijuana. You're really playing with fire. You don't really know what you're giving and what kind of side effects it could have. It could result in serious illness and it could result in death in some cases."

"Pets are not necessarily people in fur coats," Sudduth added. "And how they metabolize medications and utilize medications those are all separate issues that have to be determined."

It is still illegal for veterinarians to prescribe medical marijuana pills. "We need to know about the indications, the usage, the side effects the toxicities and all of those things would have to be worked out before any of these medications, like marijuana might be used," Sudduth said.

What are the best statistics and strongest research/arguments to support marijuana prohibition and strict criminal enforcement? (Now updated with some...)

I posed the question in the title of this post toward the end of my first class session of the exciting new seminar I am teaching this Fall 2013 semester at OSU's Moritz College of Law.  Indeed, I challenged the terrific (and seemingly very insightful and knowledgeable) students taking the seminar to spend the next week looking for (and sending to me for posting here) the very best statistics and the strongest research and arguments they could find to support marijuana prohibition.

Helpfully, and to provide a running start on a question that I hope will generate some dialogue in the comments, there are more than a few anti-drug advocacy groups which have already marshalled materials in support of prohibition.  A research assistant helped me assemble links to these notable advocacy groups:

I am hoping that seminar students and other readers might help me cull through the materials on these sites and elsewhere to help provide a sophisticated and detailed answer to the question in the title of this post.

UPDATE:  So far, three students from my seminar have sent me a bunch of materials and links concerning what they perceive to be the "best" ideas and arguments to support marijuana prohibition.  Here are a few highlights from these efforts:

The DEA in 2010 produced this impressive 81-page booket, titled Speaking Out Against Drug Legalization, which says it is "designed to cut through the current fog of misinformation with hard facts [by] present[ing] an accurate picture of America’s experience with drug use, the nature of the drug problem, and the potential for damage if the United States adopts a more permissive policy on drug abuse." Here are a few (of dozens) of the bullet points from this document discussing the health risks posed by marijuana:

I have not sought to check or question the references cited for these statements, but I am inclined to take the claims at face value.  In addition, building largely on these sorts of medical claims while making a few other arguments, here are links to a couple notable and prominent commentaries making the case in favor of marijuana prohibition:

Last but certainly not least, the Director of the Office of National Drug Control Policy, R. Gil Kerlikowske, gave this notable public statement to California Police Chiefs Association Conference in March 2010 titled "Why Marijuana Legalization Would Compromise Public Health and Public Safety." Here is how he summed up his main arguments against marijuana legalization at the start and tail end of this speech:

The concern with marijuana is not born out of any culture-war mentality, but out of what the science tells us about the drug’s effects. And the science, though still evolving, is clear: marijuana use is harmful. It is associated with dependence, respiratory and mental illness, poor motor performance, and cognitive impairment, among other negative effects....

Legalizing marijuana would also saddle government with the dual burden of regulating a new legal market while continuing to pay for the negative side effects associated with an underground market whose providers have little economic incentive to disappear....

Legalization means the price comes down, the number of users goes up, the underground market adapts, and the revenue gained through a regulated market will never keep pace with the financial and social cost of making this drug more accessible.