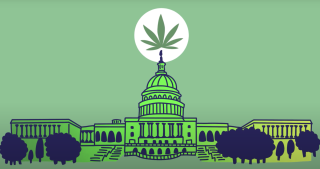 Interestingly, on the morning of Election Day, the US House Committee on Oversight and Reform released this notice announcing that on "Tuesday, November 15, 2022, at 10:00 a.m. ET, the Subcommittee on Civil Rights and Civil Liberties will host a hybrid hearing titled 'Developments in State Cannabis Laws and Bipartisan Cannabis Reforms at the Federal Level'.” The next evening, this follow-up memo was released providing a lot more notable details about this notable congressional hearing (including a list of scheduled witnesses).  Here are excerpts:

On October 6, 2022, President Biden announced that he granted a pardon to everyone convicted of simple marijuana possession under federal law and called for a review of how marijuana is scheduled under the Controlled Substances Act (CSA). Advocates for cannabis reform welcomed the President’s actions but continue to call for action in the legislative branch to decriminalize cannabis....

This hearing will be a bipartisan examination of the many benefits of decriminalization at the federal level, including: criminal justice reform, which will largely benefit communities of color, as well as the justice system more broadly; access for veterans through the Department of Veterans Affairs; and the ability for the legal cannabis industry to access financial services.

And this official website provides some more interesting background and also the expected witnesses. Here is a snippet:

Marijuana arrests account for 43% of all drug arrests, and nine in ten of those marijuana arrests are for simple possession. Although Black and white people use cannabis at roughly the same rates, Black people are nearly four times more likely to be arrested for violating marijuana possession laws, which carries life-altering implications for employment, housing, and education. Decriminalizing cannabis at the federal level and expunging criminal convictions for possession would alleviate these burdens and allow for societal advancement.

Marijuana Moment has good coverage of this planned hearing in pieces here and here.