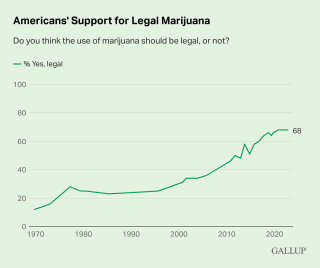 Americans' support for marijuana legalization remains at the record-high 68% recorded each of the past two years.

Combining data for the past five years, from 2018 through 2022, allows for a more robust analysis of demographic differences in views about marijuana legalization than is possible from a single poll. Using this aggregate, Gallup finds support for legalization averaged 67% among the general population but varied significantly by subgroup. Conservative, religious and older Americans are the least supportive, while liberal, nonreligious and younger Americans are the most supportive.

Specifically, subgroups whose support for legalization exceeds the national average by 10 or more percentage points include those with no religious preference (89%), self-identified liberals (84%), Democrats (81%), young adults (79%) and those who seldom or never attend religious services (78%).

Given the importance of ideology and age in predicting individuals' support for marijuana legalization, ideological subgroups of different ages show some of the largest intergroup differences in attitudes.

At every age level, conservatives are less likely than moderates or liberals to support making marijuana legal. However, majorities of younger conservatives (those under age 50) favor legalization, compared with 32% of older conservatives.

Age differences among political moderates are more modest, with 20 points separating the oldest (62%) and youngest (82%) moderates. That contrasts with a 33-point gap between the oldest and youngest conservatives. Liberals, on the other hand, show similarly high support -- 81% or higher -- regardless of age.