Notable new Gallup polling on marijuana attitudes and use 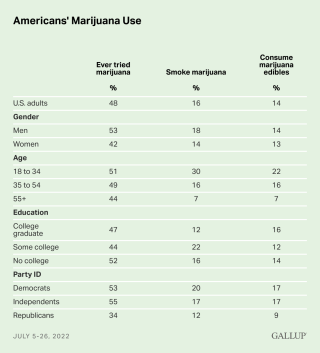 The folks at Gallup are reporting here some intriguing new polling data under the headline "Americans Not Convinced Marijuana Benefits Society." Here is part of the write up of the results of new Gallup polling:

Americans are evenly split in their views about marijuana's effect on society, with 49% considering it positive and 50% negative. They are slightly more positive about the drug's effect on people who use it, with 53% saying it's positive and 45% negative.

Also, although Americans have not reached a consensus on whether marijuana benefits people or society, they see it far more positively than they do alcohol. As Gallup reported previously, the same poll finds three in four adults believing alcohol negatively affects society, and 71% think it is harmful to drinkers.  These results are from Gallup's July 5-26 Consumption survey, conducted annually each July....

Here are the current demographic patterns for all three marijuana-related behaviors.

Gender: Men are more likely than women to say they have ever tried marijuana, but the two genders are similar in their self-reports of smoking marijuana and consuming marijuana edibles.

Education: Unlike the strong educational relationship seen with tobacco, education is not a great discriminator in people's use of marijuana. Those with a college degree are about as likely as those with no college education to have ever tried it or to use it currently.

Party: Democrats and independents report similar levels of marijuana use, while Republicans are less likely to smoke or eat it. They are also less likely to have ever tried it.