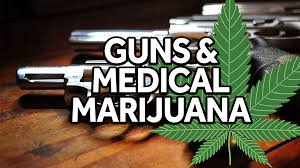 The folks at Marijuana Moment now have two lengthy posts discussing the recent filings in a lawsuit challenging the federal gun prohibitions applicable to medical marijuana users.  Here are links to the stories and excerpts:

The Department of Justice asked a federal court on Monday to dismiss a lawsuit that seeks to overturn a policy blocking medical marijuana patients from buying or owning guns. The filling is partly premised on the government’s position that it would be too “dangerous to trust regular marijuana users to exercise sound judgment” with firearms.

In making its case for dismissal, DOJ also drew eyebrow-raising historical parallels to past gun bans for groups like Native Americans, Catholics, panhandlers, those who refuse to take an oath of allegiance to the government and people who shoot firearms while drunk....

At a top level, the Justice Department said the gun rights are generally reserved for “law-abiding” people. Florida might have legalized medical cannabis, but the department said that doesn’t matter as long as it remains federally prohibited.

The Justice Department’s characterization of medical marijuana patients as uniquely dangerous and unfit to possess firearms in its new response to a lawsuit exposed an “insulting” and antiquated perspective, Florida Agriculture Commissioner Nikki Fried told Marijuana Moment on Tuesday....

The Biden administration’s Justice Department didn’t just hold the line by denying the therapeutic benefits of marijuana, it also made the case that people who use cannabis would be too “dangerous to trust” to possess firearms. The memo’s reefer madness-era rhetoric has dismayed advocates and amplified frustrations over the president’s unfulfilled promises to enact modest cannabis reforms.

“There’s so many of us for years — for decades — who have been fighting against this stereotype of marijuana users,” the commissioner, who is running in a Democratic gubernatorial primary for a chance to challenge incumbent Gov. Ron DeSantis (R) in November, said. “To see the Department of Justice put it down in a 40-page memo defending their motion to dismiss is very disappointing.”