Might some kind of "omnibus" federal marijuana reform bill get through Congress this year? 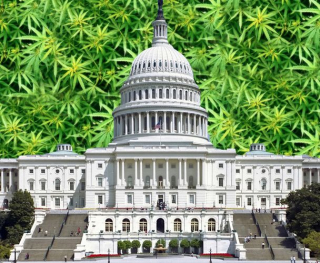 The question in the title of this post is prompted by this interesting Marijuana Moment article headlined "New Details On Congressional Marijuana Omnibus Bill Emerge As Lawmakers Work For 60 Senate Votes."  Here are some of the intriguing particulars from an extended piece worth reading in full:

Two key congressmen made waves in the marijuana community on Thursday by disclosing that there are high-level talks underway about putting together a wide-ranging package of incremental marijuana proposals that House and Senate lawmakers believe could be enacted into law this year.  But multiple sources tell Marijuana Moment that issues under consideration go further than the banking and expungements reforms that were at the center of the public discussion that has emerged.

The dueling pushes for comprehensive legalization and incremental reform — a source of tension among advocates, lawmakers and industry insiders over many months — may actually result in something actionable and bipartisan by the end of the current Congress, those familiar with the bicameral negotiations say.  That said, no deal is set in stone and talks are ongoing.

In addition to the banking and expungements proposals that made waves when discussed publicly at a conference on Thursday by two key House lawmakers, there are also talks about attaching language from other standalone bills dealing with issues such as veterans’ medical cannabis access, research expansion, marijuana industry access to Small Business Administration (SBA) programs and broader drug sentencing reform....

Reps. Ed Perlmutter (D-CO) and Dave Joyce (R-OH) first publicly disclosed that there were discussions about crafting a bipartisan cannabis package at an International Cannabis Bar Association conference on Thursday, with Joyce revealing a recent meeting he had about the idea with Schumer.

Perlmutter, sponsor of the Secure and Fair Enforcement (SAFE) Banking Act, said that his legislation to safeguard financial institutions that work with state-legal marijuana businesses would be part of the package under consideration, but he also said at the time that members are interested in including Joyce’s Harnessing Opportunities by Pursuing Expungement (HOPE) Act to incentive state and local governments to expunge prior marijuana records, as well as proposals to provide veterans with access to medical cannabis and expand marijuana research.

But those four issues — banking, expungements, research and veterans — noted earlier by Law360, are only part of what’s on the table, sources who have been involved in the negotiations but requested anonymity, told Marijuana Moment on Friday.  They stressed, however, that a deal has not yet been reached and talks are tentative at this point.

Another possible component that lawmakers have discussed including in the omnibus legislation would be a proposal to give cannabis businesses access to SBA loans and services that are available to every other industry. It’s a reform that Sen. Jacky Rosen (D-NV) in particular has consistently advocated for, including in a recent letter to the head of SBA.

While it’s not clear what stage the negotiations over the prospective marijuana package is at, a congressional source said that Rosen has spoken with Schumer about her interest in advancing the issue as he’s worked to navigate the congressional cannabis waters.

“These talks are very serious,” a source involved in criminal justice reform said. “I would say this is one of the most serious bipartisan, bicameral conversations that we’ve seen occur in our time in this space.”

To be clear, Senate leadership isn’t giving up the push for the broader CAOA legalization bill at this point.  Nor is Perlmutter fully conceding passing the SAFE Banking Act on a sooner timetable, either as standalone legislation or as part of a large-scale manufacturing bill called the America COMPETES Act that’s currently in a bicameral conference committee....

Other sources told Marijuana Moment that they’ve been involved in conversations about potentially adding to the in-progress cannabis package language that would provide for record sealing of federal misdemeanor convictions, as would be prescribed under the standalone Clean Slate Act from Rep. Lisa Blunt Rochester (D-DE).  It’s the type of reform that presumably would not compromise GOP support given the widespread recognition that offenses like simple possession should not lead to long-term consequences like the loss of access to housing and job opportunities.