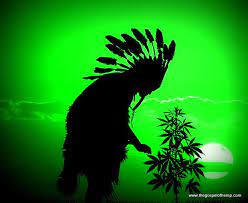 My Marijuana Law, Policy & Reform seminar is in its homestretch, and there are scheduled for the coming weeks a host of student presentations on the research topics of their choice.   As I often mention, before their presentations, students are expected to provide in this space some background on their topic and links to some readings or other relevant materials.  The first of this coming week's presentations is focused on native tribes involved in marijuana activities.   Here is how the student describes the topic and the provided readings:

Native Americans have the highest poverty rate in the United States and the percentage of American Indians and Alaska Natives living in poverty is nearly twice the rate of the nation.  In addition, the U.S. Commission on Civil Rights “reported that -- due to things like historical discriminatory policies, insufficient resources, and inefficient federal program delivery -- Native Americans continue to rank near the bottom of all Americans in terms of health, education, and employment.”  Some tribes have begun to look towards the marijuana marketplace as a different way to generate revenue for their tribe and to encourage economic development.

Tribes that have been able to build successful marijuana enterprises have seen great benefits.  The Las Vegas Paiute in 2017 opened a 15,800 square foot dispensary called NuWu Cannabis Marketplace which has since been deemed a blueprint for the industry and brings in over $5 million in sales per month.  A designated amount of the profits from the company goes to the Paiutes’ general fund to support things like medical and educational expenses of tribe members.  However, some tribes have faced extensive legal barriers to their attempts to tap into this potential financial gain.  Federal raids and threatened state intervention has left some Native American communities weary of even thinking about entering into this realm.

Marijuana is still illegal under federal law and the federal government is in charge of regulating tribes.  However, Congress can transfer its jurisdiction over tribes to the states if it chooses and in some states it has given them exclusive jurisdiction, through Public Law 280, over all crimes committed on reservations.  The interaction between state and federal law and the overall lack of clarity often leaves tribes to make tough decisions in this space with little guidance.  This presentation explores the legal issues implicated with tribal marijuana and discusses what has happened when tribes have entered or tried to enter the market.