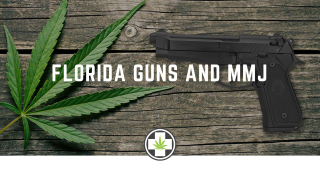 The lawsuit targets a federal form that asks whether the gun buyer is an unlawful user of drugs and specifies that marijuana is illegal under federal law. A person allowed by the state to use marijuana must then check “yes,” which results in denial of the purchase. Lying by checking “no” runs the risk of a five-year prison sentence for making a false statement.

Fried, whose office oversees concealed weapons permits and regulates some aspects of medical marijuana, argues in her lawsuit that the form violates the Second Amendment rights of lawful medical marijuana patients and runs afoul of a congressional budget prohibition on federal agents’ interfering with state-sanctioned cannabis laws.

The suit has ramifications beyond Florida: At least 37 states have legalized medical marijuana, and recreational use is legal in 18 states, as well as Guam and Washington, D.C. The lawsuit is timed to land on April 20 — a nod to the slang reference of "420" for marijuana.

The suit is laden with political opportunity for Fried, who became the only Democrat elected statewide in 2018 when she ran on an unabashedly pro-cannabis platform. Two years before, 71 percent of Florida voters legalized medical marijuana, and polls show a majority favor legalization of recreational use. Florida also has 2.5 million concealed weapons permit holders, according to Fried’s office.

“Medical marijuana is legal. Guns are legal. This is all about people’s rights,” Fried said in a statement to NBC News. “And I don’t care who I have to sue to fight for their freedom.”

In her official capacity as agriculture commissioner, Fried is bringing the suit with three citizens who have been affected by the federal rules. It names the acting head of the Bureau of Alcohol, Tobacco, Firearms and Explosives and Attorney General Merrick Garland as defendants. While it’s rare for a Democrat to sue a Democratic administration during an election year, Fried said the issue can no longer wait because of the volume of complaints her office has received.

A spokesperson for ATF said the agency “can’t speculate on possible litigation or discuss any pending litigation” but implicitly blamed federal lawmakers for not changing the Controlled Substances Act and the Gun Control Act, which respectively regulate marijuana and firearms....

Fried’s former pollster, Keith Frederick, said any risks for her by bucking the Biden administration are offset because she’s raising her profile by embracing a popular issue. “You can have the best affordable housing plan possible, but once you get to point No. 2, people’s eyes glaze over, and they stop paying attention,” Frederick said. “People care about this.”

Support for medical marijuana and cannabis legalization cuts across party lines, as does opposition to the conflicting regulations in state and federal law. Gun rights are also generally popular in Florida.

Fried’s lawsuit notes that even conservative Supreme Court Justice Clarence Thomas groused in an unrelated case about the “half-in, half-out regime that simultaneously tolerates and forbids use of marijuana.” “This contradictory and unstable state of affairs strains basic principles of federalism and conceals traps for the unwary,” Thomas said.

Other plaintiffs have tried and failed to sue the federal government over gun purchases. Fried’s lawsuit singles out the most recent lawsuit for presenting “a thin and stale factual record” that improperly ignored a federal study concluding that “marijuana use does not induce violent crime.” In addition, unlike the other unsuccessful federal case, Fried’s lawsuit argues that the form violates the so-called Rohrabacher-Farr Amendment, which prohibits ATF from enforcing anti-cannabis policies in states that have opted for legalization.

The full lawsuit is available at this link.  The complaint runs 33 pages, followed by more than 200 pages of notable attachment.