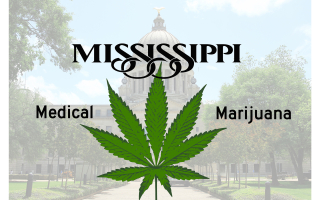 As reported here by Marijuana Moment, the "governor of Mississippi on Wednesday signed a bill to legalize medical marijuana, making the state the 37th to enact the policy change in the country." Here is a bit more:

The legislature approved the measure last week with solid margins, advancing the reform more than one year after voters approved medical cannabis legalization at the ballot. That initiative was struck down by the state Supreme Court for procedural reasons, prompting lawmakers to take it up legislatively.

In a social media post, Gov. Tate Reeves (R) said that there’s “no doubt that there are individuals in our state who could do significantly better if they had access to medically prescribed doses of cannabis.” However, he reiterated concerns that there are “also those who really want a recreational marijuana program that could lead to more people smoking and less people working, with all of the societal and family ills that that brings.”

More details and context can be found in this MJBizDaily piece headlined "Mississippi governor signs medical cannabis legalization bill into law." Here is an excerpt:

The law is effective immediately, and the market could launch before year-end....

The measure, Senate Bill 2095, calls for license applications to be accepted within 120 days, or 150 days in the case of dispensaries. But the bill, passed by lawmakers last week, is more restrictive than what voters approved at the ballot box in 2020....

Alabama and Louisiana are the other two states in the Deep South that have legalized medical cannabis. MJBizDaily has its own definitions of what constitutes a medical cannabis state, and by that definition, Mississippi becomes the 39th to legalize such a program.