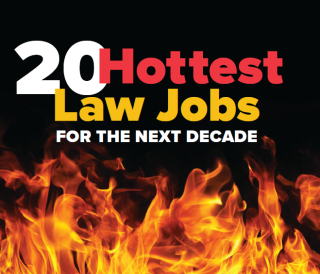 Thanks to Paul Caron's posting, I just saw that the latest issue of The National Jurist has an extended feature headlined "20 hottest law jobs for the next decade" which makes mention of cannabis lawyering. Here is a bit of the piece's preamble along with its short discussion of "Cannabis Law":

Crystal balls are hazy, but we’re following the trends to predict which practice specialties will be most in demand.... What’s next on the horizon? That’s a tough question, but it’s not impossible to predict.

We turned to top experts, the three authors of “Law Jobs: The Complete Guide,” to get their opinions on which fields show the most promise. They know their stuff. In their book, they identify hundreds of specialties and sub-specialties.

The most pertinent advice from the authors: “While it makes sense to take a close look at hot specialties, the most important thing is to find a job that fits one’s personality, passions and values.  Our book gives readers the information about the pros and cons of each major career type in order for people to find their fit.”

Legal job experts are high on the emerging area of cannabis law.  Yes, pun intended.  Seriously, nearly all lists of hot legal specialty areas include cannabis law.  Makes sense.  A majority of Americans now live in states where marijuana is allowed for recreational and/or medical use.

Legal marijuana is a heavily regulated area, and laws vary considerably from state to state.  Because everything is new, regulators are struggling to interpret the rules as they go.  Throw in the fact that marijuana remains illegal under federal law and you have plenty of potential pitfalls that require lawyers.  A mistake can result in criminal prosecution for your client, and maybe for yourself.

Cannabis law is a blend of areas, including administrative law, banking law, entity formation, intellectual property, tax law and venture capital.  Because it requires knowledge of so many areas, most cannabis lawyers work in small specialty firms or in specialty groups within large firms.  It’s a competitive niche field, not something to dabble in.  Even though the area is expanding, jobs aren’t ever going to be as widely available as in traditional fields.

I think this description is generally sound, as is the full list of job areas on the list of 20 including sound and obvious choices like health law and environmental law and immigration law and M&A. But I did find it notable that just about every other "hot" jobs area of law was one that just about every law school has at least one and often multiple courses in the subject. But, as my Center has highlighted in recent reports (see here and here to download), only a handful of law schools regularly teach classes on cannabis law.