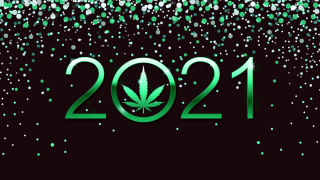 I saw this afternoon two notable "year in review posts," and there are links:

From Marijuana Moment, "Here Are The Biggest Marijuana, Psychedelics And Drug Policy News Stories Of 2021"

I recommend both of these pieces in full, but I will here highlight a few of the top-10 from the NORML review that gives particular attention to my concerns about the intersection of marijuana reform and criminal justice.

“State lawmakers have learned that advocating for adult-use legalization laws is a winning political issue that is popular with their constituents, regardless of their age, race, or political affiliation,” NORML’s Deputy Director Paul Armentano said.

In December, US Representatives Dave Joyce (R-OH) and Alexandria Ocasio-Cortez (D-NY) introduced federal legislation to provide funding to state and local governments for the purposes of expunging the records of those with marijuana-related convictions. Following the bill’s introduction, NORML’s Political Director Justin Strekal said, “This bipartisan effort represents the growing consensus to reform marijuana policies in a manner that addresses the harms inflicted by prohibition. There is no justification for continuing to prevent tens of millions of Americans from fully participating in their community and workforce simply because they bear the burden of a past marijuana conviction.”....

The number of persons arrested in the United States for violating marijuana laws declined 36 percent between 2019 and 2020, according to data released in September by the US Federal Bureau of Investigation. According to the agency, police made an estimated 350,150 arrests for marijuana-related violations in 2020. That total is down more than 50 percent from peak levels in 2008, when police made over 800,000 marijuana-related arrests. Marijuana-related arrests were least likely to occur in 2020 in western states — most of which have legalized the possession of the substance.

“As more states move toward the sensible policy of legalizing and regulating cannabis, we are seeing a decline in the arrest of non-violent marijuana consumers nationwide,” NORML’s Executive Director Erik Altieri said. He added, however, “While these numbers represent a historic decline in arrests, even one person being put into handcuffs for the simple possession of marijuana is too many.”