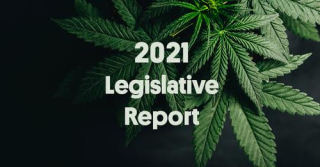 Via this Facebook posting, NORML noted its new legislative report detailed that "lawmakers in 2021 enacted over 50 laws liberalizing marijuana policies in more than 25 states."  This online report provides all the details and includes these introductory passages:

2021 was a significant year for marijuana policy reform. Among the most significant developments, legislatures in five states enacted laws legalizing adult-use marijuana possession and regulating retail cannabis markets.  This marks a change from past years, when similar laws were primarily enacted via citizens’ initiatives, not by legislative action. In total, 18 states — comprising nearly one-half of the US population — now have laws on the books regulating adult-use marijuana production and retail sales.

Many states also took actions facilitating the expungement or sealing of past marijuana convictions. Such provisions are now generally part and parcel of any adult-use legalization law. In all, state officials have vacated over 2.2 million marijuana convictions in recent months.

These legislative actions reflect the reality that the majority of the public supports meaningful marijuana reforms.  According to recent polling data, nearly seven in ten Americans, including majorities of all major subgroups by gender, age, income and education, and including majorities of Democrats, Independents, and Republicans, believe that the use of marijuana should be made legal.  Only eight percent of adults still favor its continued criminalization.

Public and political support for these legislative changes in marijuana laws will continue growing in 2022 and beyond.  As we look ahead to next year’s legislative session, we expect to see lawmakers advance with many of the same issues in other states, and we also expect voters in several jurisdictions to decide on citizen-initiated ballot measures next November.