"New GOP weed approach: Feds must ‘get out of the way’" ... which is an important historic drug policy theme 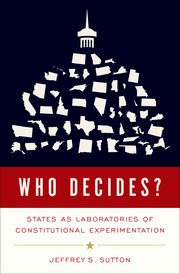 The first part of the title of this post is the headline of this notable new Politico piece, and the second part draws on this recent short book review that I recently authored for The Federalist Society blog.  I was reviewing Judge Jeffrey Sutton’s majestic Who Decides, in which the judge richly develops and documents why “some matters should not be nationalized” while urging a “renewed appreciation for the virtues of localism.”  In my (too brief) review, I stressed the importance of these localism themes for drug policy throughout US history, and I highlighted this fascinating 1921 Atlantic piece by journalist Louis Graves discussing how alcohol prohibition most effectively gained adherents from a “gradual building up of dry sentiment" at the local level until “Federal interference ... dealt a blow to the cause of real prohibition.”

With Judge Sutton's book and my own affinity for ever-evolving political realities, the long Politico piece by Natalie Fertig and Mona Zhang provides an effective accounting of some structural issues in play in the modern marijuana reform discourse.  I recommend the article in full, and here are excerpts:

Republicans are warming to weed. Nearly half of Republican voters support federally decriminalizing cannabis, and GOP lawmakers are now beginning to reflect their constituents’ view by increasingly supporting broad legalization at the state and federal level.

“We need the federal government just to get out of the way,” said Rep. Nancy Mace (R-S.C.), who introduced the first Republican bill in Congress to decriminalize marijuana this past week and pointed to more than 70 percent of Americans supporting the idea.

Stronger Republican involvement could hasten a snowball effect on Capitol Hill, where Democrats lead the charge on decriminalization but lack results. It could also chip away at Democrats’ ability to use cannabis legalization to excite progressives and younger voters as the midterms approach.

“When the culture becomes more accepting of something, even the most resistant groups get tugged along,” said Dan Judy, vice president of North Star Opinion Research, which focuses on Republican politics. “I don't want to directly conflate marijuana legalization with something like gay marriage, but I think there's a similar dynamic at play.”

As Republicans wade into the weed group chat, they are bringing their principles, constituents and special interest groups. When Mace introduced her bill on a freezing day on the House triangle, she was surrounded at the podium not by Drug Policy Alliance and the National Organization for the Reform of Marijuana Laws, but by veterans groups, medical marijuana parents, cannabis industry lobbyists and Koch-backed Americans For Prosperity.

Many GOP proposals include lower taxes and a less regulatory approach than Democratic-led bills, while often maintaining elements popular among most voters, like the expungement of nonviolent cannabis convictions. “I tried to be very thoughtful about what I put in the bill that would appeal to Democrats and Republicans,” Mace said in an interview on Monday. “Which is why criminal justice reform is part of it. It's why the excise tax is low.”

The motivations bringing Republicans to the table are also changing. Former Capitol Hill cannabis advocates like Sen. Cory Gardner (R-Colo.) and Rep. Dana Rohrabacher (R-Calif.) advocated primarily for their state legalization programs, but Mace comes from South Carolina — a state with no medical or recreational cannabis program. She joins other GOP lawmakers who are pushing for federal policy to move beyond their own states — they include Reps. Matt Gaetz and Brian Mast of Florida, where only medical marijuana is legal, and libertarian-leaning Sen. Rand Paul of Kentucky, which does not yet have a medical program....

Six in 10 younger GOP voters — what Pew described as the “Ambivalent Right” in a recent report — believe marijuana should be legal for medical and recreational use, but older, educated Republicans and Christian conservatives do not feel the same way....

Republicans who support legalization are viewing the issue through the prism of states' rights, personal freedom, job creation and tax revenue. Many libertarian-leaning Republicans are early supporters of cannabis policy reform, arguing that arresting people for using cannabis is a violation of personal liberties.

Some Republicans also cite the racial disparities in marijuana arrests as a reason to fix federal law — though Democrats focus more strongly on criminal justice reform on the whole. And, as is the case for Democrats, the shift is often generational: Texas Young Republicans announced they support marijuana decriminalization back in 2015.

The shift within the GOP at times is less about lawmakers’ own beliefs about marijuana and more about how much the public has shifted on the subject. Bill sponsors in North Dakota, for example, said they were personally opposed to marijuana, but introduced the bill anyways to head off the possibility of a ballot initiative that would legalize marijuana through the constitution — especially after South Dakota voters approved legalization in 2020.