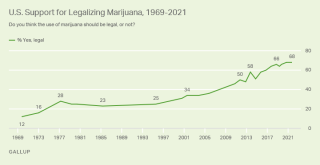 This new release from Gallup, headlined "Support for Legal Marijuana Holds at Record High of 68%," reports on the latest result of its polling on marijuana reform. Here are the details:

Gallup has documented increasing support for legalizing marijuana over more than five decades, with particularly sharp increases occurring in the 2000s and 2010s. In 2013, a majority of Americans, for the first time, supported legalization.

As was the case in 2020, solid majorities of U.S. adults in all major subgroups by gender, age, income and education support legalizing marijuana.

Substantive differences are seen, however, by political party and religion. While most Democrats (83%) and political independents (71%) support legalization, Republicans are nearly evenly split on the question (50% in favor; 49% opposed). Weekly and semiregular attendees of religious services are split on the issue as well, while those who attend infrequently or never are broadly supportive of legalizing marijuana.