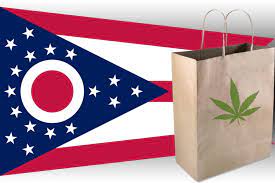 Perhaps because I live and work in Ohio, I still tend to consider the state a national bellwether politically.  But, in recent elections (due in part to gerrymandering as well as to other factors), the state has been quite red politically with  GOP candidates winning the vast majority of statewide and local elections.  Whether now considered a bellwether or a deep red state, recent developments on the marijuana reform front strike me as quite interesting and worth watching in the months ahead.  Here are the basics from two great Marijuana Moment articles:

Ohio lawmakers are preparing to file a bill to legalize and regulate marijuana in the state. This would mark the first time such a proposal to allow recreational cannabis commerce has been introduced in the legislature. Rep. Casey Weinstein (D) is sponsoring the legislation alongside Rep. Terrence Upchurch (D). While the text of the measure has not yet been released, the lawmakers circulated a co-sponsorship memo to colleagues on Thursday to shore up support for the effort in advance of its formal introduction....

The bill would legalize possession of up to five ounces of cannabis for adults 21 and older and allow them to cultivate up to 12 plants for personal use. It will also include provisions to expunge prior convictions for possession and cultivation activities that are being made legal under the measure.

Ohio marijuana activists have a new plan to legalize cannabis in the state as lawmakers pursue separate reform legislation.  Voters rejected a 2015 legalization initiative, and advocates suspended a campaign to place another measure on the 2020 ballot due to the coronavirus pandemic.  But on Tuesday, the Coalition to Regulate Marijuana Like Alcohol (CTRMLA) launched a new effort to implore legislators to enact the policy change.

The group submitted the requisite 1,000 signatures to the Ohio attorney general’s office on Tuesday.  Officials now have 10 days to review the summary and text to ensure that it is “fair and truthful” and approve it for circulation. Several existing medical cannabis businesses are backing the measure....

Unlike past efforts, the new measure is a statutory, rather that a constitutional, proposal.  If supporters collect 132,887 valid signatures from registered voters, the legislature will then have four months to adopt the measure, reject it or adopt and amended version.  If lawmakers do not pass the proposal, organizers will then need to collect an additional 132,887 signatures to place the measure before voters on the ballot in 2022.

The start of an statutory initiative campaign, which gives the Ohio General Assembly a chance to act on proposed reforms before the proposal goes directly to the voters, strikes me as especially shrewd and interesting.  This approach will likely keep the issue in the news in ways that ought to be helpful to reform proponents (e.g., they can discuss tax revenues and the need for Ohio to keep up with its reform neighbors); and this approach may require many state legislators to have to express a position on reform in a run-up to an off-year election in which a topic like marijuana reform could help turn out some extra voters.  Interesting times.