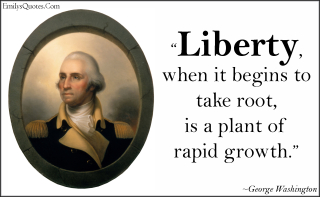 In a 1788 letter to James Madison, George Washington had a wonderful quote that seems especially fitting to highlight on a marijuana blog on Independence Day 2021:  “Liberty, when it begins to take root, is a plant of rapid growth.”  I have long thought that one of many reasons marijuana prohibitions have proved unsuccessful is because cannabis is itself a "plant of rapid growth" and so is readily cultivated in so many places by so many people no matter when the law formally provides or permits.

Of course, this quote strikes me as especially fitting circa July 4, 2021 after the 2020 election in which adult-use ballot initiatives passed handily in Arizona, Montana, New Jersey, and South Dakota while medical marijuana initiatives passed overwhelmingly in Mississippi and South Dakota.  And in the first half of 2021, we have already seen four more states legalize fully adult use of marijuana  (Connecticut, New Mexico, New York and Virginia) and also seen Alabama enact medical marijuana reform.  The liberty to use marijuana, once it took root after the ballot initiatives in Colorado and Washington in 2012, has seen a decade of growth that has been even more rapid than anyone might have reasonably predicted.

That said, though fans of marijuana freedom certainly have plenty to celebrate today, the recent suspension of US sprinter Sha'Carri Richardson serves as a reminder that we are still a very long way from being fully free from marijuana prohibitions.  Most fundamentally, blanket prohibition of marijuana for any and all uses is still the federal law of the land in the Land of the Free, and there is little reason to be optimistic that this will change before we celebrate Independence Day 2022.  Though many consider access to cannabis fundamental to "Life, Liberty and the pursuit of Happiness," there is still much work to do before we can truly declare independence from laws that make it a crime to grow and consume this particular "plant of rapid growth."