Justice Thomas talks up reconsidering Raich, but has no compatriots (yet) 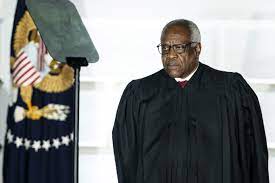 One of many interesting stories of modern marijuana reform has been the relative lack of Supreme Court engagement with the issue in modern times (which, of course, is partially a function of the relative lack significant federal reforms passed by Congress to date).  Against that backdrop, it was especially surprising and exciting that Justice Thomas today decided to pen this five-page statement respecting the denial of cert in a tax case, Standing Akimbo v. US,  in order to question whether the Raich decision upholding federal power to prohibit all marijuana activity is still good law.  The whole statement is a must read, and here are just a few passages that I especially enjoyed (cites and footnotes removed):

Whatever the merits of Raich when it was decided, federal policies of the past 16 years have greatly undermined its reasoning.  Once comprehensive, the Federal Government’s current approach is a half-in, half-out regime that simultaneously tolerates and forbids local use of marijuana.  This contradictory and unstable state of affairs strains basic principles of federalism and conceals traps for the unwary....

though federal law still flatly forbids the intrastate possession, cultivation, or distribution of marijuana, Controlled Substances Act, the Government, post-Raich, has sent mixed signals on its views.  In 2009 and 2013, the Department of Justice issued memorandums outlining a policy against intruding on state legalization schemes or prosecuting certain individuals who comply with state law.  In 2009, Congress enabled Washington D. C.’s government to decriminalize medical marijuana under local ordinance. Moreover, in every fiscal year since 2015, Congress has prohibited the Department of Justice from “spending funds to prevent states’ implementation of their own medical marijuana laws.”  That policy has broad ramifications given that 36 States allow medicinal marijuana use and 18 of those States also allow recreational use.

Given all these developments, one can certainly understand why an ordinary person might think that the Federal Government has retreated from its once-absolute ban on marijuana.  One can also perhaps understand why business owners in Colorado, like petitioners, may think that their intrastate marijuana operations will be treated like any other enterprise that is legal under state law.

Yet, as petitioners recently discovered, legality under state law and the absence of federal criminal enforcement do not ensure equal treatment....

Suffice it to say, the Federal Government’s current approach to marijuana bears little resemblance to the watertight nationwide prohibition that a closely divided Court found necessary to justify the Government’s blanket prohibition in Raich. If the Government is now content to allow States to act “as laboratories” “‘and try novel social and economic experiments,’” Raich, 545 U. S., at 42 (O’Connor, J., dissenting), then it might no longer have authority to intrude on “[t]he States’ core police powers . . . to define criminal law and to protect the health, safety, and welfare of their citizens.” Ibid.  A prohibition on intrastate use or cultivation of marijuana may no longer be necessary or proper to support the Federal Government’s piecemeal approach.

Of course, Justice Thomas dissented in Raich, so perhaps it should not seem lke a big surprise that he would be inclined to talk up the possibility that it is no longer good precedent.  Still, I do not think the tax issue in Standing Akimbo directly called for considering Raich's standing and status.   And, of course, Justice Thomas "had me at hello," given that a mere eight months ago I was talking up in this post the prospects of "Raich 2.0" challenges to federal prohibition because so much has changed in the 16 years since the original Raich ruling.  (In my prior post, I suggested a number of new Justices might not only be inclined to join Justice Thomas to reconsider the Commerce Clause ruling in Raich, but also might be inclined to breathe some life into the Ninth and Tenth Amendments in this unique context.  And one could further speculate that Justices Breyer, Kagan and Sotomayor might be open to considering Fifth and Eighth Amendment challenges to the modern functioning of federal marijuana prohibition.)

Disappointingly, none of Justice Thomas's fellow Justices joined his statement, and so it is unclear whether there could be others inclined to now reconsider Raich.  But I am hopeful that perhaps this statement by Justice Thomas alone could fuel some more lower court litigation and discussion, perhaps on a number of different grounds, concerning whether blanket federal marijuana prohibition now functions in constitutionally problematic ways.  I think it is only a matter of time before we start to see more Supreme Court engagement with marijuana reform issues, and broadside constitutional issues always make for an interesting place to start.